Danger from the Sea: Electromagnetic Weapons

EMP is a powerful and potentially devastating form of electromagnetic "fallout." It’s usually associated with nuclear weapons, although it can be triggered by any major explosive bursts. Unlike radioactive fallout, this rain won’t directly harm living things. It will just catastrophically fry all electronics and modern electrical systems by inducing staggeringly large and rapid current or voltage surges.

It makes a great equalizer for small nations looking to stand up to military Goliaths, argues Rep. Roscoe Bartlett (Rep.-Md.), a former research scientist and engineer who has worked in the past on projects for NASA and the military. All one needs to wreak some serious EMP damage, he charges, is a sea-worthy steamer, $100,000 to buy a scud-missile launcher, and a crude nuclear weapon. Then fling the device high into the air and detonate its warhead.

Such a system might not paralyze the entire United States, he concedes. ”But you could shut down all of New England. And if you missed by 100 miles, it’s as good as a bulls eye.”

As noted in a EagleSpeak: Warning about EMP since 2005, a properly placed EMP attack 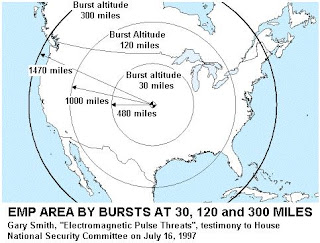 effectively could cast us back in time 200 years. No running water, no refrigeration, no electricity, no sewage - anything run by computers could be shut down.

Email ThisBlogThis!Share to TwitterShare to FacebookShare to Pinterest
Labels: EMP