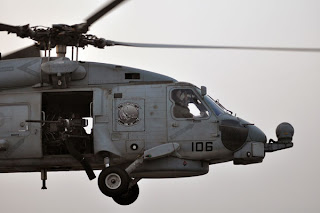 An escalation or an act of frustration? In either case, foolish.

No rounds of ammunition struck the SH-60B. The SH-60 crew did not return fire. No personnel injuries resulted from the incident.

Win Far is a Taiwanese-flagged vessel that was pirated April 6, 2009, and over the past 135 days it has been used as a “mother ship” to conduct other known pirate attacks, most notably the U.S. flagged Maersk-Alabama in April 2009.

The helicopter was conducting a routine surveillance flight of M/V Win Far currently held at anchorage by Somali pirates south of Garacad, Somalia when the incident occurred. 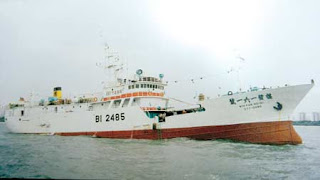 During the flight, aircrew observed activity, but could not ascertain they were fired upon until their return to Chancellorsville and review of Forward Looking Infrared Radar (FLIR) video, which recorded the incident. The helicopter was approximately 3,000 yards from Win Far when it was fired upon. 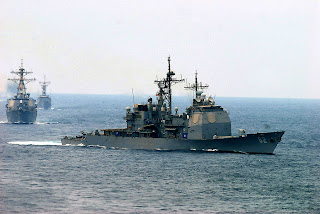 More than 30 crewmembers remain as hostages aboard the pirated vessel M/V Win Far.

Aug. 26, 2009) Somali pirates aboard the Motor Vessel (M/V) Win Far fired on a U.S. Navy SH-60B Sea Hawk helicopter assigned to the Scorpions of Helicopter anti-Submarine Squadron light (HSL 49). The helicopter, embarked aboard the guided-missile cruiser USS Chancellorsville (CG 62), was conducting a surveillance mission near the anchored M/V Win Far south of Garacad, Somalia. No rounds struck the helicopter and no one was injured.

Gulf of Aden piracy heats up:

MV Southern Cross sent a distress signal yesterday saying it was under attack by gunmen in a skiff 80 n-miles south of Al-Mukkala, an Operation Atalanta statement said.

Norway’s frigate HNOMS Fridtjof Nansen received the distress call and travelled to the area while a South Korean helicopter from Combined Task Force 151 also arrived at the scene. The pirates broke off their attack.

Later yesterday, a skiff was boarded by the German frigate FGS Bremen, part of the EU NAVFOR patrol. Weapons were thrown overboard before the boarding.

The 4,900dwt Southern Cross was en route to Fujairah in the UAE.

In the morning of 22 August, a Japanese maritime patrol aircraft detected and reported a suspect skiff in the Gulf of Aden, some 80 nm east off Aden. The aircraft observed 7 persons on board, a ladder and large amounts of fuel. The skiff was approximately 5 nm away from passing merchant vessels. The Norwegian EU NAVFOR warship HNOMS Fridtjof Nansen reacted immediately and set course to the suspect skiff, launching her two fast rhibs to prepare for boarding. The Netherlands EUNAVFOR warship HNLMS Evertsen immediately launched her helicopter to close and follow the skiff until arrival of the Norwegian fast rhibs. 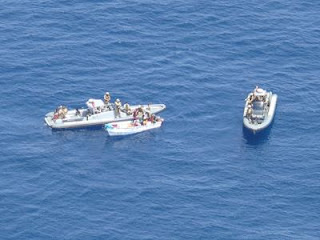 When the first skiff tried to get away, HNLMS Evertsen’s helicopter fired warning shots to stop the skiff. On observing the shots the skiff stopped and was subsequently boarded by Fridtjof Nansen’s boarding team. Due to lack of positive evidence of a pirate attack the skiff and its crew were finally released. The discovered ladders, rifles and rocket propelled grenades were seized and disposed of.