And another one bites the dust: Navy Terminates Fourth Littoral Combat Ship 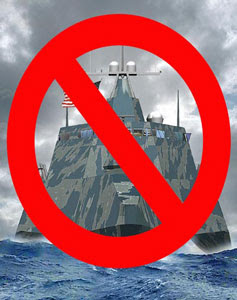 Secretary of the Navy Donald C. Winter and Chief of Naval Operations Adm. Gary Roughead announced Nov. 1 that the Department of the Navy is terminating construction of the fourth littoral combat ship (LCS 4) for convenience under the termination clause of the contract because the Navy and General Dynamics could not reach agreement on the terms of a modified contract.

The Navy had not yet authorized construction on LCS 4, following a series of cost overruns on LCS 2. The Navy intended to begin construction of LCS 4 if the Navy and General Dynamics could agree on the terms for a fixed-price incentive agreement. The Navy worked closely with General Dynamics to try to restructure the agreement for LCS 4 to more equitably balance cost and risk, but could not come to terms and conditions that were acceptable to both parties.

And in a "Other than that, Mrs. Lincoln, how was the play" moment, the Navy says:

The Navy remains committed to the LCS program.