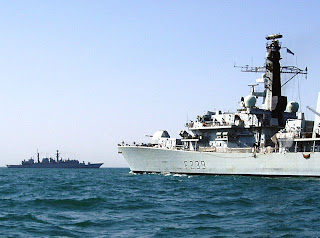 In addition to going after pirates, looks like some other scum are getting their due as set out in British and Yemeni Forces Stop Human Traffickers in Gulf of Aden:

A number of suspected human smugglers were arrested, and two vessels were seized in a joint operation between Coalition warship HMS Richmond and the Yemeni Coastguard in the Gulf of Aden Nov. 19.

Having covertly tracked two suspicious dhows throughout the day, Richmond followed the two smuggling boats as they headed toward Somalia. Under the cover of darkness, Richmond coordinated a close-quarters intercept.

It’s believed the boats had been used to smuggle humans into Yemen from Somalia.

“Monitoring the suspected smuggling vessels from afar using the ship’s tracking capabilities, we could clearly see some suspicious activity underway,” said Richmond’s Commanding Officer, Commander Piers Hurrell. “Using the stealthy features of the Type 23 Frigate, 13 suspected human smugglers were arrested, and two vessels seized. The message this sends to others involved in this illegal activity is quite clear.”

The U.K., U.S. and German navies are working with the Yemeni government under the umbrella of the Pakistani-commanded Combined Task Force 150 to promote lawful use of the maritime environment in the Gulf of Aden and the wider region to reduce the activities of human smugglers and pirates.

According to UN High Commissioner for Refugees figures, nearly 25,000 refugees have made the journey from war-torn Somalia to Yemen and there have been more than 1,000 recorded deaths.

More on human trafficking here. And a typical story here:

More than 60 migrants, mostly Somalians, drowned while crossing the Gulf of Aden on their way to Yemen in a desperate attempt to flee battles back home, a security official and witnesses said on Thursday.

Twenty-five others survived and managed to reach the Yemeni southern shores of Redhoum in the Shabwah province, after their boat capsized in the waters on Wednesday night, a security official here said.

The official spoke on condition of anonymity because he was not authorised to talk to the media.

He said that fishermen informed the authorities on Wednesday night of seeing bodies floating in the water. The army and the local citizens took part in a rescue operation.

The 25 survivors were taken to the refugee camp in the city of Lahij north of Aden. Witnesses said the dead were buried in mass graves Thursday by the local people and the soldiers.

It was not immediately clear how the boat had capsized and some survivors claimed there were six refugees missing.

The UN refugee agency has reported that at least 439 migrants have died while crossing the Gulf of Aden this year and at least another 489 are missing.

Migrants from the Horn of Africa - particularly from Somalia where ongoing violence between the UN-supported interim government and Islamic groups has caused thousands to flee their homes - regularly face abuse at the hands of smugglers at sea.

Some are attacked during the journey and thrown overboard into shark-infested waters, while smugglers often force passengers to disembark offshore to avoid Yemeni coast guard patrols.

The high season for human trafficking across the Gulf usually runs from early September to May when the sea is less stormy than during summer. More than 10,000 people have reportedly arrived in Yemen by boat this year.