IMO to Somalia: "Do something about piracy!"

In yet another strongly worded press release- er- resolution, the International Maritime Organization, a UN body urges Somali government to act on piracy:

The IMO urged the government "to take any action it deems necessary to prevent and suppress acts of piracy and armed robbery against ships" and ensure "that its coastline cannot be used as a safe haven from which attacks can be launched."

The government should ensure that "all ships seized by pirates and armed robbers and brought into waters within its territory are released promptly and that ships sailing off the coast of Somalia do not become victims", it said. 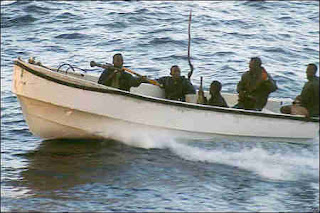 However, there was some meat in the nut:

The resolution asked the government "to advise the UN Security Council that, in response to a previous request from the IMO Council, it consents to warships or military aircraft entering its territorial sea, when engaging in operations against pirates or suspected pirates and armed robbers."

In theory, a 1992 UN arms embargo on Somalia still bars armed warships and military planes from venturing into Somali waters, although the restriction has seen numerous violations.