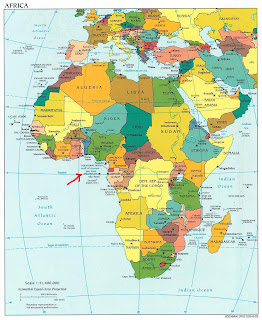 Nice summary of the African maritime challenge (and the odd position of "not enough ships of the right type" the U.S. Navy finds itself in) here:

Rather, the likeliest engagements for what will become the naval component of the newly-launched U.S. Africa Command (AFRICOM) will probably take place in the "brown waters" of delta and other riverine environments – if not at anchor in port – or just off of them. This means that littoral waters will be, at least in this theatre, more than the bridge between the Navy's area of responsibility and those of land forces. The Navy, together with the Coast Guard and other support elements, will need to be able to operate across an entire continuum.
***
As a first step, the African Partnership Station (APS) in form of the amphibious dock landing ship USS Fort McHenry arrived in Dakar, Senegal, last week at the beginning of a seven-month deployment during which it will be joined by the HSV Swift. Led by U.S. Naval Forces Europe, APS is an international interagency effort – European and African sailors join their American counterparts as well as civilian personnel onboard – aimed at enhancing regional and maritime safety and security in West and Central Africa through assistance in developing maritime domain awareness (MDA, that is, a clear picture of maritime traffic), maritime professionals and infrastructure, maritime enforcement capabilities, legal and regulatory regimes, subregional cooperation, and public awareness of maritime security issues.
***
While the most recent attacks from the Somali coast were repulsed through the fortuitous presence of no less than three U.S. Navy destroyers, neither such a robust presence on station nor the relatively less worrisome criminal motivations of the "pirates" will always be the case. The attackers, after all, could have been some of Somalia's al-Qaeda-linked radical Islamists or the naval elements might well have been deployed elsewhere. Thus the incidents should be taken as a salutary reminder of the need to cultivate the capabilities of and relationships with both enduring and new partner states in the geopolitically critical waters off Africa as well as redoubling our own vigilance against the threat of lawlessness on the waters, both deep and shallow.

The tension, as noted by Dr. Pham between the "sea robberies" and vessel hijackings within the territorial waters of a nation (no right to intervene) and those that occur on the high seas ("go get 'em") is one of things that makes this piracy issue so interesting.
Posted by Mark Tempest at 11/14/2007 10:28:00 AM