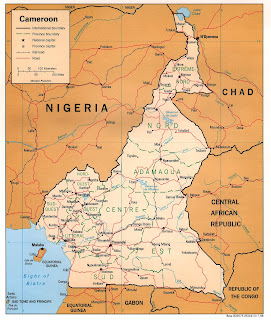 No less than 21 Camerounian soldiers were attacked and killed Monday by suspected pirates on the high sea off the Bakassi peninsula.

While news agencies quoted a source in the Camerounian military as identifying the gunmen as a "suspected militant group from Nigeria," minister of foreign affairs, Chief Ojo Maduekwe, yesterday absolved Nigerian soldiers from the incident.

A military source in Yaoundé has confirmed that 21 Camerounian soldiers were killed and that the attackers seized weapons, leaving other soldiers wounded.
***
Gunmen who remain unidentified had on the same day attacked the Qua Iboe terminal jetty of Mobil Producing Nigeria, at Ibeno in Akwa Ibom State, which led to the death of a pregnant woman, Mrs Effiong Willie. She was apparently caught by a stray bullet.

Fishermen who witnessed the attack at Ibeno said the militants arrived the area in seven speed boats carrying about 50 pirates, attacked the security post at the jetty and engaged military security men in a gun battle.