From the Sea: Emergency Aid to Bangladesh Logistics

So we flew Thursday night, landed Friday morning early, the 23rd, in Bangladesh, and met with General Moean, the chief of Bangladesh's defense forces, and Ms. Geeta Pasi, who is our charge d'affairs. We don't have an ambassador there, so she's in charge. And Ms. Denise Rollins, who is the head of USAID.

So we had a series of meetings with them. They reiterated the need for assistance that could be provided in part by the United States military. We had moved earlier the USS Kearsarge; anticipating the Bangladesh request, we had moved the Kearsarge from the Central Command area of responsibility to the Bay of Bengal just south of Bangladesh, and on board Kearsarge is the 22nd MEU, Marine Expeditionary Unit -- about 1,200 Marines; they have 20 helicopters and some landing craft. 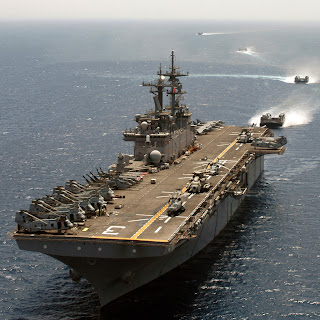 He was there for our meetings on Friday with Bangladesh officials and U.S. officials. Ron is running the operations ashore. And we also -- Admiral Willard from Pacific fleet gave us Rear Admiral Carol Pottenger. She is on Kearsarge.

So we've got a Marine one-star ashore, a Navy one-star afloat, around 1,200 sailors, another 1,200 Marines, 20 helicopters to provide relief operations in support of -- and that's the important word here -- in support of our USAID efforts to give the Bangladeshis whatever assistance they need. We have commenced helicopter operations. We are in our -- I get the time zone and days mixed. It's our third or fourth day of operations. We've flown several dozen relief sorties.

The needs right now are fairly simple, though they're still needs. Water is the overarching requirement. We're making water on the ships. We have -- the Air Force out of Hickam has flown several Reverse Osmosis Water Purification Units -- ROWPUs. USAID has several of these. So there are several of these water-cleaning machines in theater, in Bangladesh. And that's what we're doing, moving water around. The Bangladeshis have identified distribution points. They tell us where the water is being made. We're bringing water in and then we're helping move the water out to the outlying areas affected by the storm.

We are attempting as best we can to make sure that the Bangladeshis understand it's their operation and we are in support. We will do nothing that they don't ask for, and when they are done with us, we will leave. And Kearsarge will go back to its Central Command responsibilities. We may -- we have the USS Tarawa, another big-deck amphib with a Marine Expeditionary Unit headed that way. Whether or not we'll have to use Tarawa or not, we'll see. We're prepared to if the need remains.

So, another area where we're helping is medical assistance. As most of you know, I'm sure, the big-deck amphibs bring with them a significant medical capability. We have about 75 medical personnel, from surgeons, corpsmen, anesthesiologists, nurses . We are bringing those folks ashore to supplement Bangladesh medical and foreign medical assistance. There are Pakistani medical personnel there, for example. And if folks are in sufficient need, we can bring them out to Kearsarge, where we have some significant hospital emergency surgery facilities. As yet, that has not been the case, is my understanding, but significant medical assistance is being provided as well, all at the direction of the Bangladeshis.

Marine helicopters from the 22nd Marine Expeditionary Unit Special Operations Capable (SOC) delivered more than 2,500 gallons of water Nov. 27 along with 12,000 lbs., of medical supplies to areas in Bangladesh hardest hit by Tropical Cyclone Sidr, a storm that ripped through the country Nov. 15.

The Marines made an initial delivery of water on Nov. 23, marking the first delivery of U.S. military aid to the storm-battered nation. USS Kearsarge (LHD 3) and the 22nd MEU (SOC) have contributed to planning efforts with the Bangladeshi Government and military, relief agencies and other U.S. military and U.S. State Department representatives. Kearsarge and the MEU are now ramping up distribution operations with the added capabilities of the embarked helicopters.

A majority of the water delivered Nov. 27 was produced aboard Kearsarge, which has the capability to produce 200,000 gallons of fresh water daily. Five-gallon collapsible bags were filled with the water, placed on pallets and loaded into the aircraft for distribution.

"We've coordinated within the combined U.S. and Balgadeshi civil-military construct to ensure that we are getting water and supplies to the people who need it the most," said Col. Doug Stilwell, commanding officer of the 22nd MEU (SOC). "We have now moved into a more robust phase of operations." 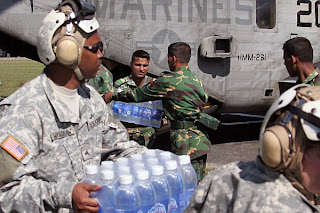 I've argued before (see also here and links therein) that the UN ought to have a "Ready Reserve Force" of ships on standby to deliver emergency aid in situations like this.
Posted by Mark Tempest at 11/28/2007 09:44:00 AM

Email ThisBlogThis!Share to TwitterShare to FacebookShare to Pinterest
Labels: Disaster Relief from the Sea, U.S.Navy