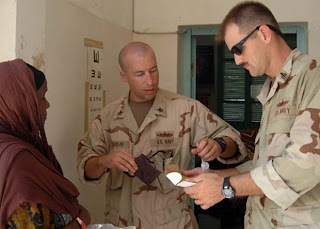 As reported here, a great use of an existing knowledge base in furtherance of mission accomplishment:

The team set out to give people a face to go with their recently established group, while also gaining knowledge on how civil affairs teams function in real environments. The MCAG was officially stood up in March by the Navy Expeditionary Combat Command and deploys small groups of Maritime Civil Affairs Teams to different countries to aid U.S. Naval forces by conducting civil military missions in a coastal and riverine environment.

The mission of the Navy and Army’s civil affairs teams are similar, however the MCATs additionally focus on commercial port operations, marine and fishing resources, and harbor and channel construction and maintenance.

“We’re hoping to learn from the Army’s civil affairs team since they’ve been in business for a long time and have already established a standard of operation that we hope to draw from and adapt to the Navy’s mission,” said Lt. Rayburn Massiah, MCAT leader.
***
While the MCAT was in Djibouti, they were able to participate in a Medical Civic Action Program that was conducted by the 350th Civil Affairs Command in the town of Obock. The team assisted where they were needed and gained hands-on experience at the MEDCAP.

“There’s only so much you can learn in a classroom about civil affairs,” said Senior Chief Electronics Technician Scott Huss, team chief for the MCAT. “Being able to participate in an actual mission shows us how things are done in the real world.”

Maritime civil affairs missions provide the opportunity for naval, joint forces and civilians in operational areas to work together.

“The 486th has provided excellent support to us throughout our mission,” said Operations Specialist 1st Class Weston McAuslan. “We really appreciate the help and guidance they have given us.”

The MCAT members learned how to nominate potential projects for a village, conduct village assessments and build relationships with locals. They also attended meetings with the Ministry of Education to discuss the prioritizing of village projects.

“I really like being a part of something where you can see the effects of the help we’re giving,” said McAuslan. “With the diversity of the work we do, we can go everywhere and work with different people and services. But our mission is always the same; we are giving these people the tools that build confidence in their abilities to help themselves and their neighbors.”

Great idea and good for both services for making it happen...