Four Korean crewmen who were released on Sunday after 174 days of captivity in Somalia with another 20 Asian crew members described their lives in the African country as miserable and hopeless.

``Pirates are entities that have to be eliminated ``The Somali pirates were armed with various weapons including rifles, cannons and other equipment. They did not lag behind any regular armed forces in scale and strength,’’ Han said. ``Among them were several retired military officers. Reportedly, the interim Somali government had designated them as a militia and supported them in secret.’’
***
Noting that its exceptional ability to gather information demonstrates that the African government supports the violent group, Lee Song-ryul, chief engineer of the Korean boats, said, ``We were captured along with other crewmen from Japan, Taiwan, Denmark, Brazil, Italy and India. I guess they have an information source providing them with routes of foreign vessels passing near the region.’’ altogether,’’ said Han Seok-ho, 40, captain of the hijacked vessels, Mavuno 1 and Mavuno 2. He said, “It is hard to express how harshly we were treated,” recollecting his six-month-long incarceration. 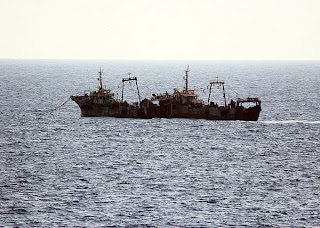 The town we arrived at right after being hijacked was seemingly the headquarters of the militant group, he said. ``The village was made up of around 300 houses. All residents in the area were sponsors or members of the pirate crews.’’
*** 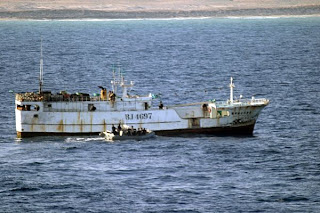 With one murdered crewmen in the ship's freezer and Somali pirates threatening to execute his son, Captain Xinshen Ling could think of only one thing to do: Threaten to throw himself into the shark-infested waters.

Four pirates immediately rushed to keep him from jumping from the Taiwanese fishing vessel.

"It was a test. I wanted to see how much the pirates valued me... They know if the captain dies, they will get less ransom," the 47-year-old said in an interview this week, safe in Kenya after the United States (US) Navy forced the pirates to release the Ching Fong Hwa 168 and its surviving crew, who included Ling's 22-year-old son.
***
The pirates made off with an unspecified ransom paid by the ship's owner.

But Ling's story has a twist. After even more ransom was demanded, the US Navy stepped in, forcing the pirates to release the Ching Fong Hwa 168 and its surviving crew, who included Ling's 22-year-old son. A Navy spokesperson says such intervention will continue in response to the spike in piracy.

"The worst time for me was the times they took my son ... they used this boy," Ling said, gesturing at the shaggy-haired Linshangyi Ling over the table at a Chinese restaurant in the Kenyan port of Mombasa. "They threatened me, said if I didn't call Taiwan they would shoot my son."
***
Ling's encounter with Somali pirates began one sunny April afternoon, when about 15 of them stormed aboard armed with automatic rifles, machine guns and rocket propelled grenades. Ling's crew was unarmed, and one member was shot in the back. He survived, but when negotiations with the ship's Taiwanese owners were going badly, the pirates executed 32-year-old Chen Tao from China.

"He was very unlucky because they just took him at random," recalled Ling, who had worked with Tao for two years. He remembers the young sailor being grabbed out of a lineup, then the six shots that rang out on the other side of the boat.

"We were in shock," muttered the weathered captain, one dragon-tattooed arm reaching up to smooth a sprinkling of white hair. "Just for money they took a life ... they are not human."