Laugher of the Day: Myanmar: Washington’s geopolitics and the Straits of Malacca

The author of this particular piece of idiocy, a Sarah Flounders, is in way over her head as she tries, on the "Workers World" site - "workers & oppressed peoples of the world unite!" - to let everyone know of the evil intentions of the United States with regard to Myanmar in Myanmar: Washington’s geopolitics and the Straits of Malacca. According to Ms. Flounders, it all about "THE OIL" and control of the Strait of Malacca

What has received little attention in the U.S. corporate media is Myanmar’s geopolitical position and its rich resources. A U.S. base in Myanmar is considered vital for control of the most strategically important sea lanes in the Pacific.
***
Hiding behind ‘humanitarian relief’

The U.S. Pacific Fleet moved back into South Asia by providing emergency relief during the Dec. 26, 2004 tsunami near Indonesia.

Using the cover of tsunami relief, the U.S. Navy also moved back into the giant U-Tapao base on the Gulf of Siam in Thailand. This had been a major front-line U.S. base during the Vietnam War, from which the Pentagon launched 80 percent of its air strikes against North Vietnam.

Ms. Flounders notes Chinese concerns, but somehow fails to mention China's efforts in the area, which I have discussed before including in China looks to the sea: 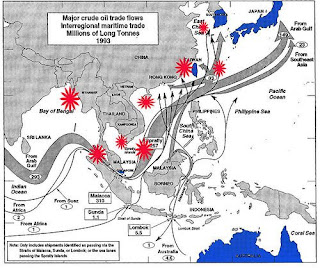 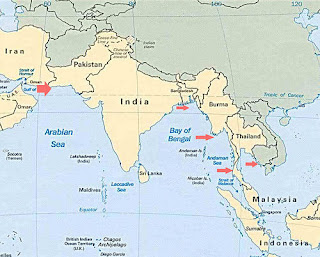