Terrorism: It's not just for governments to worry any more 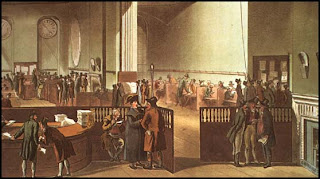 International corporations need to be thinking about counter-terrorism, as noted in Be very afraid, Lloyd's warns us from the National Post of Canada:

Yesterday, at Toronto's venerable Empire Club, Lord Levene from Lloyd's described a scary new world of terrorism and political risk directed as much against businesses as against governments.

"Right now, Lloyd's is a very significant provider of insurance for terrorism risks in Canada," he said. "The real estate, hotel and transportation sectors are amongst those we cover and the 2010 Winter Olympics is already buying terrorism coverage from Lloyd's."
***
t is not a company but a giant risk marketplace, where individuals take pieces of underwritings. Lloyd's was created to bolster the Empire by meeting the need to insure Britain's global fleet of cargo ships from ruinous losses due to piracy or war.

So, really, nothing is new. The world has always been dangerous, only more so, said Levene. While self-serving, he is also correct. The global economy means businesses are operating everywhere, including dangerous places, where local governments are inadequate and troops cannot be stationed to protect assets.

His speech was scary but important. Here are some excerpts: - "Business is as much at risk as government from terrorism and political violence." - "20% of terrorist attacks are directed against business, or between 150 to 200 incidents per year." - "After 9/11, 200,000 jobs were lost or relocated from New York City." - "In addition to 9/11 [casualties], nearly 2,000 people have died in the last decade in terrorist attacks on business worldwide."
***
- "21st-century terrorism means thinking about the worst. A fifth of global companies, and a third of larger ones, now cover this threat in their planning."

Email ThisBlogThis!Share to TwitterShare to FacebookShare to Pinterest
Labels: Terrorists