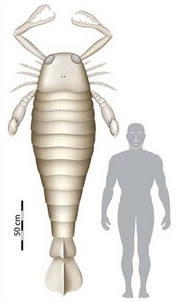 Well, people are out there looking for Bigfoot and dinosaurs, so next we'll be looking for living evidence of this bad boy bug, I suppose:

Eurypterids, or ancient sea scorpions, are believed to be the extinct aquatic ancestors of today's scorpions and possibly all arachnids, a class of joint-legged, invertebrate animals, including spiders, scorpions, mites and ticks.

Braddy said the fossil was from a Jaekelopterus Rhenaniae, a kind of scorpion that lived only in Germany for about 10 million years, about 400 million years ago.

He said some geologists believe that gigantic sea scorpions evolved due to higher levels of oxygen in the atmosphere in the past. Others suspect they evolved in an "arms race" alongside their likely prey, fish that had armor on their outer bodies.

Braddy said the sea scorpions also were cannibals that fought and ate one other, so it helped to be as big as they could be.

"The competition between this scorpion and its prey was probably like a nuclear standoff, an effort to have the biggest weapon," he said. "Hundreds of millions of years ago, these sea scorpions had the upper hand over vertebrates — backboned animals like ourselves."

That competition ended long ago.