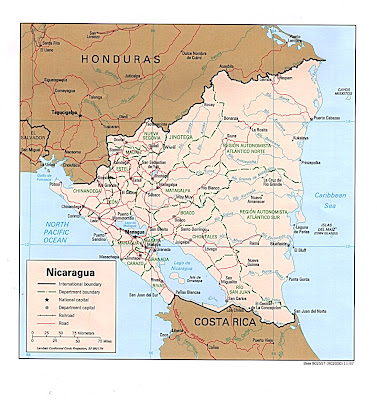 Time to dust off the Monroe Doctrine? Or just more "Mullah Mischief/" Iran's push into Nicaragua a worry for U.S., allies:

As part of a new partnership with Nicaragua's Sandinista President Daniel Ortega, Iran and its Venezuelan allies plan to help finance a $350 million deep-water port at Monkey Point on the wild Caribbean shore, and then plow a connecting "dry canal" corridor of pipelines, rails and highways across the country to the populous Pacific Ocean. Iran recently established an embassy in Nicaragua's capital.

In feeling threatened by Iran's ambitions, the people of Monkey Point have powerful company. The Iranians' arrival in Nicaragua comes as the Bush administration and some European allies hold the threat of war over Iran to force an end to its uranium enrichment program and alleged help to anti-U.S. insurgents in Iraq.

What worries state department officials, former national security officials and counterterrorism researchers is that, if attacked, Iran could stage strikes on American or allied interests from Nicaragua, deploying the Iranian terrorist group Hezbollah and Revolutionary Guard operatives already in Latin America. Bellicose threats by Iran's clerical leadership to hit American interests worldwide if attacked, by design or not, heighten the anxiety.

"The bottom line is if there is a confrontation with Iran, and Iran gets bombed, I have absolutely no doubt that Iran is going to lash out globally," said John R. Schindler, a veteran former counterintelligence officer and analyst for the National Security Agency.

"The Iranians have that ability, particularly from South America. Hezbollah has fronts all over Latin America. That is not new. But it's certainly something we're starting to care about now."