A lesson from the readings 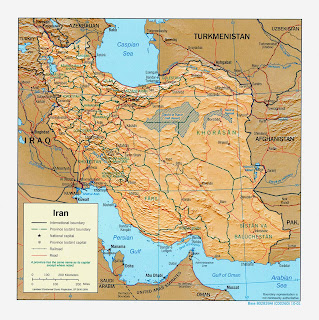 Reading American Thinker: The Rage in Huckabee's Voice reminded me of one of the more valuable lessons I learned from reading Mark Bowden's Guests of the Ayatollah:The First Battle in America's War with Militant Islam, to wit (and simplifying so that I understand it):

The group that gained power after deposing the Shah was not a sophisticated crowd with a wealth of knowledge of the world around them. Over and over, Bowden points out the lack of knowledge of the world outside the Iranian borders that the rising power group had and their immense hatred of the United States. The hatred of the U.S. comes easily since the U.S. set the Shah in place following a CIA coup guided by Kermit Roosevelt (grandson of Teddy). The Shah, in turn, retained power through fairly typical dictatorial means, including, secret police, torture, etc, the effect of which probably will always be underestimated by outsiders. However, this history and hatred justify, in the minds of the Ayatollah followers, virtually any acts of violence against the U.S. since they, in a sense, assert that the U.S. "owes" them for the years of suffering they endured under the Shah and for the lost opportunities for greatness denied them by the loss of their elected government. If Bowden dates the war with Iran to the seizure of the U.S. embassy in November 1979, this section of the Iranian populace apparently dates it much earlier than that- to the coup in 1953.

In the winter of 2005, Massoumeh Ebtekar stood before the world's political and business elite in Davos, Switzerland, and gave them a tongue-lashing. Before a startled crowd at the annual powwow of global movers and shakers, the senior Iranian official blasted the West for cultural decadence, proclaiming the values of the Islamic Republic of Iran to be superior -- and far more benevolent to women. She dismissed concerns about human rights abuses with a flick of her heavily veiled arm.

In 2005, her listeners could simply walk out on the harangue. In 1979, John W. Limbert Jr. was not so lucky; he was, literally, Ebtekar's captive audience. Limbert, an erudite diplomat and scholar of Persian poetry, was one of the 52 American hostages who suffered through 444 days of captivity in revolutionary Iran, and he remembers Ebtekar with contempt. Back then, she was known as "Screaming Mary," the young spokesperson for the student hostage-takers -- a smug radical who regularly berated the Americans with finger-waving, ill-informed lectures about the evils of their country.

At one point in Mark Bowden's riveting new book, Guests of the Ayatollah, Ebtekar browbeats a CIA agent named William J. Daugherty over "the inhuman, racist decision" to drop atomic bombs on Hiroshima and Nagasaki. After Daugherty shoots back that the Japanese started the war at Pearl Harbor, Ebtekar looks confused. "Pearl Harbor? Where's Pearl Harbor?" she asks. Hawaii, she is told. Her reply, after a moment of confused silence: "The Japanese bombed Hawaii?"

In many ways, Ebtekar is a fine symbol for Iran's amateurish young radicals. Brimming with righteous fire and a sophomoric, conspiratorial view of the world, they performed a dramatic act -- storming the U.S. embassy in Tehran on Nov. 4, 1979 -- that had grown-up ramifications for Iran, the United States and the world. The crisis (arguably) felled a U.S. president and (indisputably) strengthened the clerics' power in Iran's post-revolution power struggle, locking Iran and the United States into a spiral of conflict that whirls on today with the tensions over Iran's nuclear program.

The student radicals were convinced that the embassy was a "den of spies" aimed at restoring the shah -- the country's exiled former autocrat, whom President Carter had decided to let into the United States for cancer treatment -- to power. What they found instead, in Bowden's masterfully told tale, was a CIA mission in tatters, with not a single agent fluent in Farsi -- a bewildered team of operatives who barely understood the events engulfing them. "For years, little intelligence was collected from Iran that did not originate with the shah's own regime," Bowden writes. "Now, with Iran suddenly under new masters and the situation in constant, confusing flux, the agency was . . . pathetically far from being able to influence events, despite the overblown fears of most Iranians, who saw the CIA as omnipotent and omnipresent." In contrast, several of the diplomats on duty were first-rate Farsi speakers and Iran scholars, deeply empathetic to the country's culture and people.

But the student radicals knew little of the world and its ways, let alone the difference between a diplomat and a spy. They saw an operative with James Bond-like powers in every corner. One interrogator questioned State Department security officer Alan Golacinski about his digital watch, convinced that it was a secret radio.
***
The young, unformed minds of the student radicals were still locked in an earlier era when the CIA and British intelligence had real power in Iran and used it malevolently, above all in the 1953 CIA-supported coup that toppled the country's popular, nationalist prime minister, Mohammed Mossadegh. As a result, they scarcely understood the power of their own revolution -- of a new era of mass politics that was fed by the power of the media, a growing middle class's discontent with the shah's dictatorship, a disoriented urban proletariat in search of a savior and the determination of the country's supreme leader, Ayatollah Ruhollah Khomeini, to win at all costs. The revolution simply couldn't be undone by the CIA this time.

"Screaming Mary" and her comrades also scarcely understood the U.S. position on the revolution. L. Bruce Laingen, the seasoned diplomat and chargé d'affaires at the embassy, wrote at the start of his personal diary of the hostage-taking: "Why? To what end? What purpose is served? We have tried by every available means over the past months to demonstrate, by word and deed, that we accept the Iranian revolution . . . . we wish it well and hope it can strengthen Iran's integrity and independence."

Long-time Iran-watchers often have such "Bruce Laingen moments" -- scratching their heads and wondering why the Islamic Republic behaves so rashly and seemingly without strategic direction. In foreign affairs, the country is isolated; poor diplomacy has left it with few allies that it can count on in a crunch -- including a showdown with Washington over Iran's nuclear ambitions. (Those countries seeking to avert war are motivated more by worries about oil and stability than by loyalty to Tehran.)

Economically, the country is wretchedly managed; despite its abundant natural resources, oil reserves and talented workforce, Iran is punching far below its potential economic weight. And in politics, the country's populist new president, Mahmoud Ahmadinejad, has publicly embraced Holocaust denial -- a disgrace that, beyond its moral depravity, also raises the question: "Why? For what purpose?"

Perhaps the reason for such excesses is that the spirit of the hostage-takers still haunts Iran today. They acted without the prior knowledge of Ayatollah Khomeini, Bowden notes. The embassy seizure was not a well thought-out ploy vetted by senior officials; it was a rashly planned tactical move designed to win a short-term public relations victory, burnish the students' anti-imperialist credentials and drive a wedge between Tehran's moderates and radicals. The hostage-takers presented the new Khomeini regime with a fait accompli -- with fateful consequences.

Decades later, Iranian politics still contains something similar -- an element of surprise, along with confusion. Long after the Babel of the hostage crisis, many voices still speak in Tehran; the president says that Israel should be wiped off the map, and other political leaders scramble -- some belatedly endorsing his rant, some distancing themselves, all while the analysts scratch their heads, looking for explanations.

Indeed, that president is himself a former student radical. Some former hostages allege that Ahmadinejad was one of their interrogators. Some hostage-takers -- several of whom are reformist politicians today -- deny this, saying that he wanted to take over the Soviet embassy instead. "Without any doubt," Bowden writes, "Ahmadinejad was one of the central players in the group that seized the embassy and held hostages." Whatever the case may be, the president clearly still has much of the hard-line student radical left in him.

Meanwhile, last month, Massoumeh Ebtekar, "Screaming Mary," was awarded a prestigious prize by the United Nations for her work on environmental issues. The shadow of the student radicals has not yet receded, and this chapter in Iranian history has not yet played itself out. (Reviewed by Afshin Molavi
Copyright 2006, The Washington Post. Taken from the Amazon link above)

Which brings me back to my point about Mr. Huckabee's suggestion that we haven't talked enough to the Iranians...which Iranians would be talk to? The ones who truly believe that all of Iran's ills are the fault of the U.S.? Who literally see the U.S. as Satan? Good luck with that. It has been my experience that the less sophisticated your opponent, the more important it is to be simple and transparent in your responses to him. Nuance is wasted on True Believers.

And there is that Chicago way thing that keeps it simple:

Malone: You said you wanted to get Capone. Do you really wanna get him? You see what I'm saying is, what are you prepared to do?
Ness: Anything within the law.
Malone: And *then* what are you prepared to do? If you open the can on these worms you must be prepared to go all the way. Because they're not gonna give up the fight, until one of you is dead.
Ness: I want to get Capone! I don't know how to do it.
Malone: You wanna know how to get Capone? They pull a knife, you pull a gun. He sends one of yours to the hospital, you send one of his to the morgue. That's the "Chicago" way! And that's how you get Capone. Now do you want to do that? Are you ready to do that? I'm offering you a deal. Do you want this deal?
Ness: I have sworn to capture this man with all legal powers at my disposal and I will do so.
Malone: Well, the Lord hates a coward.
[jabs Ness with his hand, and Ness shakes it]
Malone: Do you know what a blood oath is, Mr. Ness?
Ness: Yes.
Malone: Good, 'cause you just took one.

The other side in our war with Iran has large numbers of people to whom our relationship is a feud - a blood feud- and we need to be ready to take it all the way with them. And, no, I don't really find the recent NIE report on Iran all that compelling. See here.
Posted by Mark Tempest at 12/22/2007 09:09:00 AM