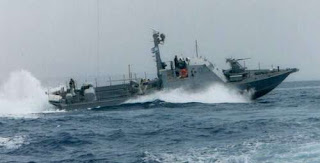 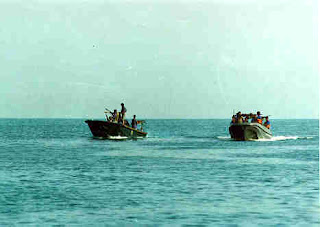 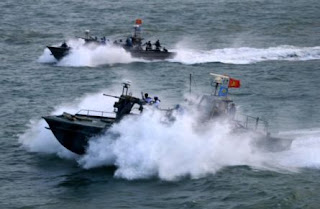 The Sri Lankan Navy and the terrorist Tamil Sea Tigers have another round as reported in Fierce sea battle leaves 41 dead in Sri Lanka:

At least 40 Tamil Tiger rebels and one naval officer were killed in a fierce sea battle off the coast of Sri Lanka's northern Jaffna peninsula on Wednesday, defense officials said.

Military Spokesman Udaya Nanayakkara said 12 naval fast attack craft began to engage a Sea Tiger flotilla composed of 16 boats in the seas south off Delft island around 11:00 a.m. (0530 GMT), and the Air Force was also called to support the Navy.

Nanayakkara said in the four-hour sea battle, the Navy destroyed at least nine LTTE (Liberation Tigers of Tamil Eelam) boats and a naval attack craft was seriously damaged after being attacked by two LTTE suicide boats.

"The body of the officer-in-charge of the naval craft has been found and 10 sailors are still missing," said the spokesman, adding that searching operation is still going on in the area.

He said the LTTE boats were smuggling arms when they were found by the Navy near Delft, the farthest and biggest of the inhabited islands off the Jaffna peninsula.

Sources close to the LTTE said a naval fast attack craft was sunk by the LTTE and two craft were damaged in the battle.

But the government's Media Centre for National Security (MCNS) said that the Sri Lankan navy had destroyed four of the 16 LTTE craft, which confronted a naval flotilla of 12 FACs. One FAC was damaged when two LTTE suicide boats rammed against it, the government said.

The FACs are Israeli made Dvoras. The LTTE uses improvised, indigenously made craft fitted with comparable or even better guns than the Sri Lankan FACs.

Photos show a Dvora and a couple of types of Sea Tiger boats.

Note that given that a favored tactic of the Sea Tigers involves the use of suicide boats, numbers of platforms and volume of fire would appear to be quite important...in fighting them.