A 1997 paper on Sea Lines of Communication (SLOC) that mostly discusses the Asia SLOC issues. Found here. Written by Stanley B. Weeks, co-author of The Armed Forces of the USA in the Asia-Pacific Region (Armed Forces of Asia) and identified as "a senior scientist with Science Applications International Corporation."

While the paper is 10 years old, its topic is timeless. As is its conclusion:

The increasing importance of SLOC security and access for states in the East Asia region will result in their increased attention to both military and non-military concerns regarding freedom of navigation. The United States, which shares the interests of the East Asian states in regional SLOC security and access, would undoubtedly welcome increased cooperation, understanding and support of regional states in upholding traditional principles of freedom of the seas so vital to seaborne trade.

Very nice set of maps, too.

Chokepoints are affected both by decreased supply and increased demand. While the physical supply of them is, for all practical purposes, fixed, and there are few current, economically viable, substitutes, the effective supply—that is, availability—is threatened by a number of factors (piracy, physical degradation, and the like) that may reduce or restrict their availability. Threats to supply can take two forms: physical constraints that restrict passage and actions by states or nonstate actors that threaten or restrict free passage through the chokepoint. 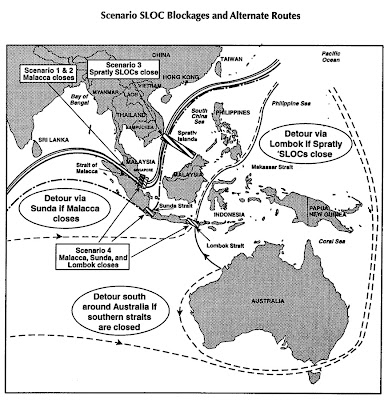