In today's electronic world, all sorts of bizarre aircraft have been "Photoshopped" onto aircraft carriers, including B-2 Stealth bombers placed on a flight deck -see the nearby photo - there have even been attempts to create the first Air Force carrier which, naturally, has a golf course... 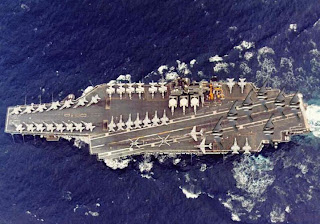 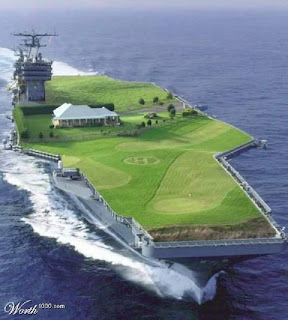 But one unusual aircraft that actually found its way to carrier flight decks was the famous U-2 "spy" plane. Yep, that high flying camera platform might have been seen on some aircraft carriers during the 1960's. 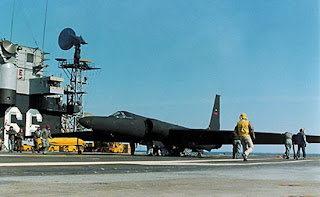 As a CIA history puts it:

In mid-1963, the Office of Special Activities set in motion OPERATION WHALE TALE to examine the possibility of adapting the U-2 aircraft for operations from an aircraft carrier. CIA planners believed that, if U-2s could be modified to operate from aircraft carriers, the United States could avoid the political problems involved in seeking permission to base U-2s in other nations.

The U-2, of course, has quite a history - an aircraft designed by the famous Kelly Johnson in Lockheed's mysterious "Skunk Works" (a reference to Al Capp's Li'l Abner comic strip, which was quite beloved at the time). The U-2 was designed to fly above known anti-aircraft missile ranges and above the operation range of the interceptor aircraft of the day. Flown out of Pakistan and perhaps other locations, the U-2s overflew the old Soviet Union with some degree of perceived safety until the day when the Soviets managed to shoot one down. This, in turn, led to the re-evaluation of the U-2 program and the controversy of basing locations arose which PROJECT WHALE TALE was designed to address. 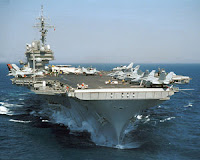 The first test of the U-2's capability for carrier operations took place in August 1963 from the USS Kitty Hawk operating in the Pacific Ocean off San Diego, California. A U-2C, which had been loaded aboard the carrier at North Island Naval Base, took off from the flight deck with a full load of fuel and was airborne within 321 feet. No assistance from catapults was necessary. Although the takeoff was very successful, the attempted landing was not. The aircraft bounced, hit hard on one wing tip, and then just barely managed to become airborne again before reaching the end of the flight deck.

Alterations to the aircraft were made to make it more suitable for carrier operations, including toughening the landing gear and adding a tail hook and "spoilers" to the wings. The "first successful carrier landing took place on 2 March 1964."

While the operational history of the carrier launched U-2s may be shrouded in mystery, the program was ended:

There was never another Agency U-2 mission from an aircraft carrier. Although the idea of using a floating airbase to avoid political sensitivity proved feasible, the cost did not. Aircraft carriers are enormously expensive to operate and require an entire flotilla of vessels to protect and service them. The movement of large numbers of big ships is difficult to conceal and cannot be hastily accomplished, while the deployment of a solitary U-2 to a remote airfield can take place overnight.

Another site (UPDATE: As noted below, quoting but not attributing the writing to Norman Polmar) offers a slightly different version of the U-2/carrier trials:

The idea started in the late 1950s when the Central Intelligence Agency (CIA) was looking for a way to overcome the range limitations of the U-2. Possessing a useful range of about 3,000 miles (4,800 km), the U-2 simply could not reach every location of interest to the CIA given the locations of U-2 bases. As a result, the CIA began a cooperative effort with the US Navy known as Project Whale Tale. The purpose of this project was to adapt the U-2 for use aboard aircraft carriers. Testing commenced in August of 1963 when, in the dark of night, a crane lifted a U-2C onto the deck of the USS Kitty Hawk at San Diego, California. The vessel streamed off the coast on the morning of 5 August where Lockheed test pilot Bob Schumacher began flight test operations. 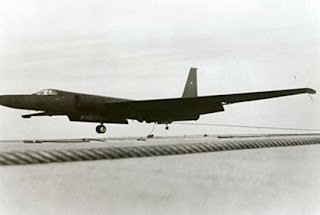 All was ready on 2 March 1964 when Schumacher made the first landing of a U-2G aboard the USS Ranger off the California coast. Although a series of touch-and-go approaches had gone well, the first landing was slightly less than successful when the arrestor hook engaged and forced the nose of the plane to dig into the deck. Despite breaking off the pitot tube, quick repairs allowed the aircraft to takeoff again. Successful takeoffs and landings continued a few days later, and the Navy considered five CIA pilots to be qualified to operate the U-2 aboard ship.
***
[Further] Sea trials took place from 21 to 23 November 1969 aboard USS America off the Virginia coast. The tests were conducted by Lockheed test pilot Bill Park plus four CIA pilots. After undergoing abbreviated carrier training, the pilots began a series of takeoffs and landings that proved completely successful. The aircraft was even transported down the ship's elevator to the hangar deck with no significant difficulties. Even after all this effort, however, the U-2R is not believed to ever have operated from a carrier again.
***
While Lockheed and the Navy continued evaluating naval derivatives of the U-2 for several years, no such aircraft ever entered service. From 1973-1974, two U-2R airframes were modified with a forward-looking radar and infrared detection system for use in the ocean surveillance role. These U-2EPX aircraft were to downlink radar data to surface ships to be melded with information from other land- and space-based sensors. However, the project was deemed too expensive and unnecessary given the evolution of satellites. Yet another proposal was a two-seat U-2 variant armed with the Condor anti-ship missile, an idea that quickly died following the cancellation of Condor.

So the carrier-based U-2 experiment remains a little known, but interesting bit of history. Give a little salute to the brave pilots who conducted the flight tests with such success.

UPDATE: See also here. Which I swear, despite the similarities in the chosen quotes, I didn't see before writing the above. Still, Norman Polmar deserves credit for getting there first. In fact, after further review, it appears that the Aerospaceweb site "borrowed" rather liberally from Mr. Polmar, without attribution...which I now offer up.

UPDATE2: More here, including this photo of a U-2 tailhook: 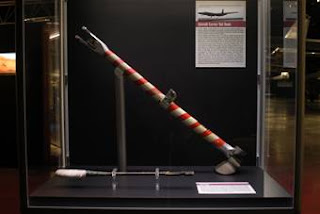