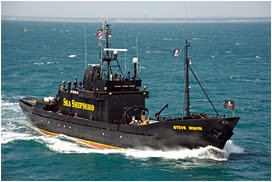 Latest ONI Worldwide Threats to Shipping Report (to 12 Dec 07)can be found here.

N. ENVIRONMENTAL AND ECONOMIC NON-STATE ACTIVIST GROUPS:
.
1. SEA SHEPHERD: Sea Shepherd’s two month campaign Operation MIGALOO will commence 28 Nov 07, Southern Ocean. Beginning 28 Nov 07, Captain Watson and his volunteer crew will leave for the Southern Ocean and should arrive in an international whale sanctuary before the Japanese fleet. The radical conservation group says it’ll do everything in its power to stop the Japanese from killing more than 1000 whales, including ramming the whaling ships if necessary to try to stop the whalers (REUTERS, AAP, LM).
.
2. GREENPEACE: Greenpeace vessel (ESPERANZA) attempts to track the Japanese
whaling fleet, 18 Nov 07, Antarctic Ocean. Japan’s whaling fleet consisted of four vessels, which departed Shiomnoseki port to hunt famed humpback whales. Japan’s whaling fleet insists that killing 950 whales or more, including 50 humpbacks is for research. The (ESPERANZA) waited outside of Japanese coastal waters and will try to track the whalers to Antarctic waters and use non-violent tactics to stop the hunters (AFP, UPI, LM: chron.com).
.
3. GREENPEACE: Greenpeace activists attempt to block shipment 25 Nov 07 in the evening, Porvoo, Finland. Protestors aboard approximately five rubber boats were attempting to block a ship carrying 9,000-10,000 tons of palm oil from reaching the company’s Kilpilahti refinery. Police and the Coast Guard eventually forced the boats used by the environmentalists back to shore, and a total of 33 activists from different countries were arrested. According to Greenpeace, the police removed the fuel tanks from three of their boats on land and then the Coast Guard towed one of the boats ashore (LM: allheadlinenews.com, YLE Uutiset).
.
4. GREENPEACE: Greenpeace activists attempt to stop tanker (DOROUSSA) from
transporting palm oil, per 23 Nov 07 reporting, Rotterdam port, Netherlands. Environmentalists have chained themselves to the containers on the vessel to prevent the unloading of Indonesian palm oil. About six rubber speedboats brought the 20 protestors to the vessel. The vessel is destined for the company Vopak in Vlaardingen to unload its cargo (LM: Expatica).
.
5. GREENPEACE: Tanker (MT WESTAMA) was blocked while at berth by Greenpeace
activists 16 Nov 07, Dumai, Sumatra Island, Indonesia. Activists reportedly anchored the Greenpeace vessel (RAINBOW WARRIOR) beside the (MT WESTAMA) blocking the vessel
from leaving its berth destined for India with its palm oil cargo. The protest aimed to highlight the role palm oil plays in driving global deforestation and peatland destruction, which are major contributors to climate change. The vessel was finally able to depart from its birth on 18 Nov 07 (LM: REUTERS, AFP).
.
6. GREENPEACE: Activists blocked shipment 14 Nov 07 at port Tarragona in
northeastern Spain. Activists blocked a shipment of coal in a protest over climate change. Police arrested six protestors along with four journalists and press photographers in Greenpeace’s motorized inflatable boats. Other Greenpeace activists attached themselves to cranes offloading some of the 155,000 tons of coal from the ship. The protest was still continuing in the early afternoon. About 20 Greenpeace activists took part in the protest, aimed at drawing attention to the burning of coal as a source of greenhouse gas emissions (AFP).

The term "international terrorism" means terrorism involving citizens or the territory of more than one country.

The term "terrorist group" means any group practicing, or that has significant subgroups that practice, international terrorism.

The U.S. Government has employed this definition of terrorism for statistical and analytical purposes since 1983.

Now, explain to me why "Greenpeace" is not a terrorist organization, subject to sanctions and punishment?