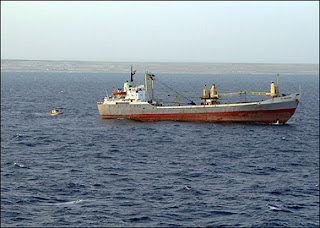 Somali pirates have set the Al Marjan free, as set out here:

Somali pirates on Sunday released a Comoran-flagged cargo vessel that was captured off the country's coast in October, the United States Navy said.

The MV Al Marjan, with 22 mostly Asian crew members on board, was seized on October 19 as it sailed to Mogadishu port from the United Arab Emirates port of Dubai.
***
Robertson said USS Whidbey Island, a dock landing ship, had sent help to the released vessel.

"We are ready to offer them (crew) any assistance they need - food, medicine," she added.

Caption for photo below:

USS WHIDBEY ISLAND, At Sea - Crew members from merchant vessal Al Marjan and boarding team members from USS Whidbey Island observe Whidbey Island in the distance. Al Marjan was released from pirates off the Somali coast Dec. 2. Al Marjan had been under the control of Somalia-based pirates since Oct. 17. USS Whidbey Island (LSD 41) was on hand to assist the vessel and its crew following its release. The U.S. Navy has maintained a ship presence off the coast of Somalia since late October. There has been as many as six pirated vessels off the Somali coast over the last 30 days. The U.S.-led multinational maritime task force responsible for planning counter-piracy operations off the Horn of Africa includes Italy, the Netherlands, and the United Kingdom. Coalition forces conduct Maritime Security Operations under international maritime conventions to ensure security and safety in international waters so that all commercial shipping can operate freely while transiting the region. 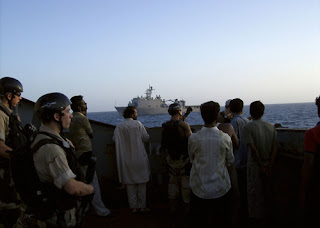