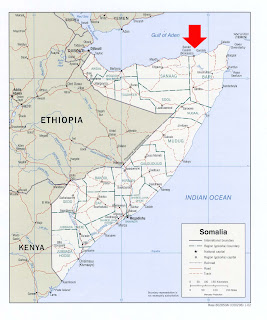 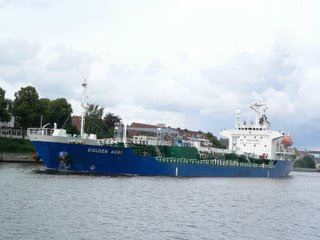 U.S. and German navy ships have cornered Somali pirates who seized a Japanese-owned chemical tanker more than a month ago and are demanding a ransom, an official said on Tuesday.

The Panama-registered Golden Nori was carrying benzene from Singapore to Israel when it was hijacked on October 28, just off Somalia, one of the world's most dangerous shipping lanes.
***
"One German and two American warships have been after Golden Nori for 42 days after it was hijacked. The pirates arrived in Bosasso around 10 p.m.," Saeed Mohamed Rage, Puntland region's fishing and marine minister told a news conference in the northern port town of Bosasso.

He said there were 21 crew members on board.

"We are negotiating with their captors. We told them to surrender to Puntland authority," Rage said, adding that the pirates were demanding an undisclosed ransom.

"We are in good communications with the Americans and we are still engaged in dialogue with the hijackers," he said.