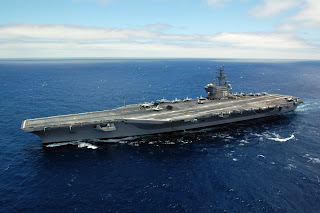 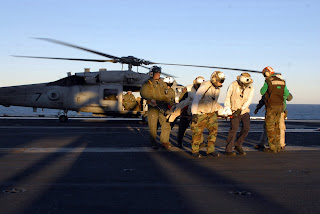 Somebody was looking out for a fifteen year old on a cruise ship who needed emergency medical attention and got the carrier Uss Ronald Reagan involved,, as set out in Ronald Reagan and HS-4 Medevac 14 Year-Old Girl From Cruise Ship

Sailors from USS Ronald Reagan (CVN 76), and the pilots and aircrew of Helicopter Anti-Submarine Squadron Four (HS-4) rescued a teenage girl Dec. 15 who suffered a ruptured appendix while aboard a cruise ship in the Pacific Ocean.

The girl, a 14 year-old from Albion Ill., had been experiencing abdominal pains while aboard the Dawn Princess. The Bermuda-flagged vessel was located off the coast of southern Baja California, Mexico and was approximately 550 miles away from Ronald Reagan when they issued the distress call late Saturday evening.

"It's a great example of the type of things we are called upon to do, and it's neat we were able to execute it as well as we did," said Capt. Terry B. Kraft, Ronald Reagan's commanding officer.

"I was most impressed with the teamwork on board the ship. Everybody rallied together," added Kraft. "It was a great coordinated effort between our helicopter squadron, HS-4, our medical folks and the Sailors here on the ship that enabled us to head down there very quickly. I'm also very proud of our ship's surgeon, who completed a successful operation."

Under the direction of Commander, U.S. Third Fleet and Rear Adm. Phil Wisecup, Ronald Reagan Strike Group Commander, USS Ronald Reagan responded to the call for help because it was the closest vessel with a hospital and the ability to transport and stabilize the patient.

Ronald Reagan launched two HH-60H helicopters from HS-4 at approximately 5 a.m. Dec 15 to transport the patient from the Princess cruise liner to Ronald Reagan for medical treatment. Because the cruise ship was unable to provide a landing area for the helicopter, a basket was lowered in order to raise the patient into the helicopter for transport.

"The patient was stable upon arrival, however with a presumptive diagnosis of a ruptured appendix, she was taken straight in to the operating room," said Cmdr. Theron Toole, Ronald Reagan's senior medical officer.

"She's getting the best care and her prognosis for a full recovery is good," said Toole.

Toole said that most cruise ships don't have surgical or advanced medical capabilities and are limited to minor emergencies and some trauma situations.

Medical personnel aboard the aircraft carrier USS Ronald Reagan (CVN 76) transfer a patient from an HH-60H Seahawk from Helicopter Anti-Submarine Warfare Squadron Four (HS) 4 following an emergency medical evacuation (MEDEVAC) at sea. The crew of Ronald Reagan and HS-4 helped MEDEVAC a 14-year old Illinois girl who had suffered from a ruptured appendix while vacationing aboard the Dawn Princess cruise ship off the coast of Baja, Mexico. Upon arrival to the ship, the ship's surgeon conducted an emergency appendectomy and the patient is resting comfortably aboard Ronald Reagan. U.S. Navy Photo by Mass Communication Specialist 2nd Class Joseph M. Buliavac (Released)