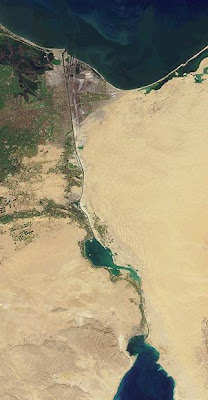 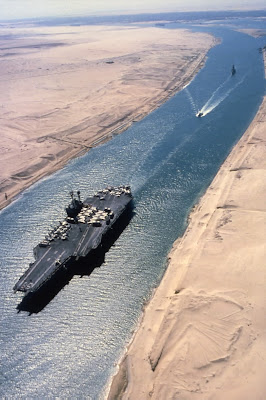 SUEZ CANAL 20 December – TWO part-laden tankers carrying a combined 250,000 tonnes of oil collided in the Suez Canal this morning, with both running aground. The VLCC Overseas Meridian, carrying 158,000 tonnes of crude on a northbound passage, collided with the southbound Suezmax ISI Olive, carrying 88,000dwt of oil, at 0700 local time this morning. The accident happened at the southern end of the canal at Lat 29.57N, Long 32.34E, forcing closure of the waterway.
Fairplay understands that ISI Olive lost steering and veered into the path of the Overseas Meridian, which took evasive action, though this has not been confirmed. The ISI Olive was holed in the forepeak and the port side ballast tank, though the Overseas Meridian suffered no obvious damage. Neither vessel appears to have leaked oil at this stage and there have been no reports of casualties among the crew.
AIS signals indicate that all traffic in the area has stopped, and local agents report that the canal will be closed until salvage is complete. ISI Olive has now been refloated by the tugs Salam 6 and Ezzat Adel.

Note the closure is temporary and the ships are aground and not sunk midstream.

A Maltese-flagged tanker ran aground in the Suez Canal early Thursday, halting traffic in the major waterway for six hours until it was towed away, officials said.

No oil was spilled from the ISI Olive tanker, Suez Canal Authority said in a statement.

The statement said the 1992-built crude oil tanker got stranded just after passing through the southern, Red Sea entrance of the waterway because of a failure in the steering gear which caused it to run aground on the western bank of the 190 kilometers (120 miles) long canal.

It took Suez Canal authorities six hours to extricate and tow the tanker, which is Iranian-owned, away. The 81,000-ton 270-meter-long vessel was only slightly damaged.

Because of the traffic halt, 59 ships were delayed for passage from both the Mediterranean and the Red Sea mouths.

Not a collision? Not a good place for a steering casualty...