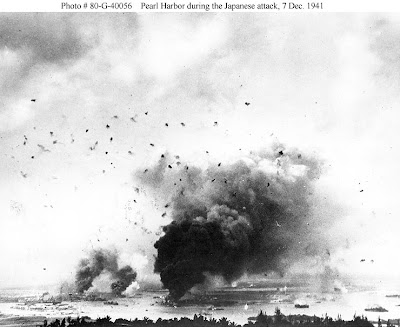 Update: Following Pearl Harbor, things changed forever. Small towns across America provided their sons for military service, their daughters to replace men on assembly lines. It being total war, true sacrifices were demanded on our citizens ranging from rationing to the ultimate price of war. Some rose to known heroism, others, no less heroic, went unrecognized except to God. Far be it for me to attempt to capture the spirit of times or the dogged pursuit of the enemy our forces undertook. But, as the last survivors of Pearl Harbor fade, it is worth remembering how they and their fellow Americans responded and fought back, not resting until victory was won.

Offer up a salute to them, if you will. And never forget them.