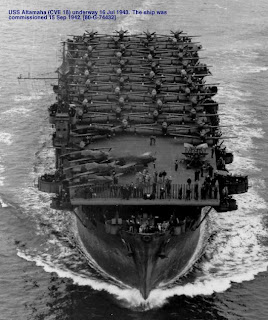 Following up on a previous post in the Sunday Ship History series that looked at merchant ships that served as mini-aircraft carriers (while retaining their ability to carry cargo), it's time to look at those merchant hulls that were completely converted into pure aircraft carriers...albeit small, slow carriers, sometimes referred to as “jeep” carriers or “escort aircraft carriers.”

Contrary to history as dramatically in the movie “The Wings of Eagles,” the concept of escort carriers was not created by Frank “Spig” Wead (though he was an advocate of them)– but began with the British Navy capture of a German merchant vessel in the early days of World War II and the conversion of that ship into the escort carrier HMS Audacity. Even then, the idea of smaller aircraft carriers had been kicked around by the Brits at the end of WWI with experiments involving converting light cruisers into aircraft carriers. With the end of that war, the experiments stopped, but the concepts lingered on, as is very well set out in “The Emergence of the Escort Carriers” by Scot MacDonald from the December 1962 issue of Naval Aviation News (available in pdf format here). Mr. MacDonald's work has been liberally borrowed from herein because he identified some of the more farsighted Naval officers who were advocates of smaller carriers, in addition to the heavy fleet carriers. One such man was Lieutenant Commander Bruce G. Leighton, who wrote “Light Aircraft Carriers, A Study of their Possible Uses in So-Called 'Cruiser Operations,' Comparison with Light Cruisers as Fleet Units.” As Mr. MacDonald notes, Leighton

..forecast every fundamental combat requirement of the later-day CVL's and CVE's, including the bombing of capital ships, support of fleet operations, anti-submarine work, scouting and reconnaissance, and the reduction of enemy shore bases.

Others who were involved in pitching the need for smaller (“pocket-size”) carriers before WWII included Captain John S. McCain (the Senator's grandfather), while he was an aircraft carrier CO), and somewhat less directly, RADM Halsey and ADM Husband E. Kimmel. ADM Ernest King, however, was not a fan. Indeed, MacDonald quotes another historian as stating, “The escort carrier was forced upon the Navy by the President.” Much more on President Roosevelt's involvement can be found in MacDonald's work. Of interest is that Roosevelt was pushing helicopter carriers (before helicopters were really in the fleet) – and there was some discussion of using “autogiros” (an idea which has reappeared on occasion, see here). 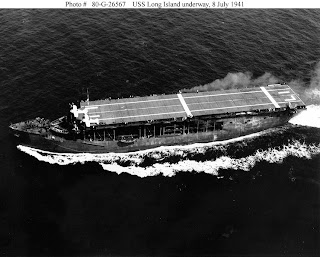 Eventually, the decision was made to convert a couple of diesel-powered merchant hulls, Mormacmail and Mormacland, and within a few months the prototype “aircraft escort vessel” (AVG) was commissioned on June 2, 1941 as USS Long Island (AVG-1). The other ship was turned over the the Royal Navy as HMS Archer (BAVG-1). The lessons learned from these ships had a major impact on the development of the future escort carriers – diesel power was abandoned in favor of steam turbines, and an additional elevator was added to the new carriers, giving the newer CVE's two. Flight decks were expanded. Four new ships were created from the hulls of planned fast oilers (Sangamon class). Eventually,

...President Roosevelt announced a need for more escort carriers. Shipbuilder Henry J. Kaiser had impressed the President with the merits of a plan which would permit the mass production of escort carriers... 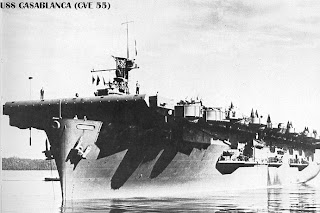 Mr. MacDonald notes, “This was an impressive achievement in wartime production program.” Or, as another source notes:

A Kaiser built CVE would be 512 feet long, displace about 9570 tons and carry 110 officers and 750 enlisted. Armament included one 5” 38 caliber gun and eight twin 40 mm AA guns. In addition, they carried 12 TBM's and 16 Fm-2. The flight deck had a single hydraulic catapult.

These ships with their CVE designation were referred to as “Combustible, Vulnerable and Expendable” actually proved their worth repeatedly – evolving into hunter-killer groups, they became deadly sub hunters: 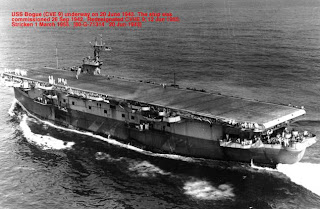 ***
In the Pacific, Jeeps performed less glamorous but no less important duties. Whether providing air cover for amphibious landings, ferrying planes, resupplying the big carriers or performing tactical air strikes in support of ground forces ashore, the little flat tops did whatever work had to be done. With all there versatility, however, they were never designed to go toe-to-toe with heavy enemy surface units in a running sea battle. They never had to – until Oct 25, 1944, off the island of Samar in the Philippines.

The story of Taffy 3 and the destroyers and destroyer escorts engaged in that battle is very well told in the book Last Stand of the Tin Can Sailors. During that battle, two of the CVE's were sunk during a running gun battle which saw extraordinary heroism by their crews, the crews of their escorts and the pilots of their embarked planes, many of whom many simulated bombing runs on the Japanese force despite lacking any weapons with which to complete the attack. 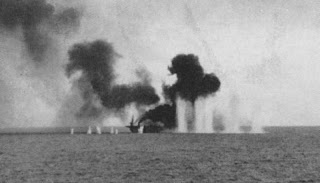 The Korean War? Sure, some of these ships continued their service after WWII and transported aircraft to Korea or acted as “floating airfields” off the Korean coast. Again, during the Vietnam War, 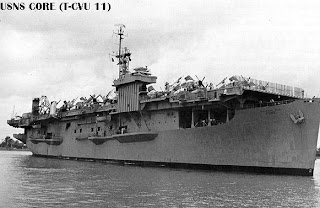 some of the CVE's were taken out of mothballs and used to transport Army aircraft to Southeast Asia. USNS Card was sunk by a explosive device placed on her hull by a enemy diver (she was later refloated). USS Thetis Bay was converted to the prototype helicopter carrier (back to President Roosevelt's original idea) and served as a test bed for the modern amphibious ships. USS Gilbert Islands 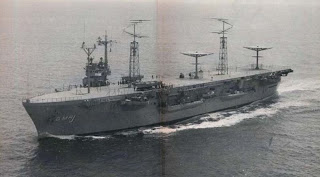 was converted into a radio relay ship (and renamed USS Annapolis (AGMR-1)), leading the way to the amphibious command ships like USS Blue Ridge (LCC-19). The original U.S. escort carrier, USS Long Island was reconverted to a merchant ship and continued in operation as merchant ship until being converted again when she was sold to the University of the Seven Seas and turned into a school ship, then later sold to the University of Rotterdam and used as a floating dormitory. At least a couple of these ships were used in the Dirty Harry movie “Magnum Force” (remember the scenes where the motorcycles are jumping between ships?)...

Today, however, these small, slow and invaluable ships all seem to have been scrapped, leaving only their legacy of valiant service for us to salute.
Posted by Mark Tempest at 12/16/2007 11:01:00 PM