How to earn a Silver Star 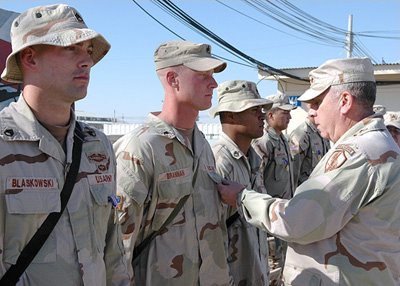 "GENERAL John P. Abizaid, Commander, USCENTCOM, Awards the Silver Star to SSG Patrick Brannan,1st Scout leader of Scouts, HHC, 2-503 IN. On the Morning of 03 May 2005, he led a joint American-Afghan mounted patrol to the village of Khanry in the southern area of the Khakiafghan district in the Zabul povince of Afghanistan. They courageously pursued what was an estimated 60-100 man AQAM (Al Qaida and Associated Militants) element. He heroically lead his soldiers through one of the most intense firefights in the past 3 years of combat operations in Afghanistan. These actions lead to a significant one-sided US victory with at least 49 enemy combatants killed or captured and AQAM operations in Deh Chopan substantially disrupted."