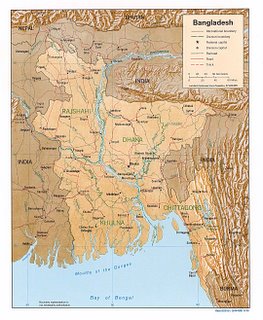 The JMB was formed in 1998 in Bangladesh’s Jamalpur district, according to one regional security analyst who spoke to ISN Security Watch on condition of anonymity.

The group’s exact origins are vague, but it came to prominence in May 2002 when eight Islamic militants were arrested in Parbatipur, in the northern Dinajpur district. The militants were caught with 25 petrol bombs and documents detailing the outfit’s activities.

Then in February 2003, the JMB allegedly carried out seven bomb attacks in the Chhoto Gurgola area of Dinajpur, in which three people were wounded.

The government banned the JMB in February this year, after the group was linked to a series of bomb attacks on non-governmental organization offices, shrines, and entertainment events in the country. Leaflets bearing the group’s name and calling for the introduction of Islamic law were found at all the bombsites.

The leaflets in Bangladeshi and Arabic, which the group used to claim responsibility for attacks, also revealed the group’s intentions.

“We’re the soldiers of Allah. We’ve taken up arms for the implementation of Allah’s law, the way the Prophet, Sahabis, and heroic Mujahideen have done for centuries. It is time to implement Islamic law in Bangladesh. There is no future with man-made law,” the leaflets stated.

According to local media, the JMB is led by a triumvirate consisting of Maulana Abdur Rahman, a former activist of the Jamaat-e-Islami political party; Siddiqur Islam, who is also known as Bangla Bhai; and Dr. Muhammad Asadullah al-Ghalib, an Arabic language lecturer at the Rajshahi University.

While Maulana Rahman is regarded as the spiritual leader of the organization, Siddiqur Islam (Bangla Bhai) is reportedly its “operational chief”. Dr. Muhammad Asadullah al-Ghalib was arrested in February 2005 and charged with sedition. The other two leaders remain free.

“The JMB is an associated group of al-Qaida. Prior to October 2001, the JMB received significant al-Qaida assistance in training and finance,” Dr. Rohan Gunaratna, a Singapore-based terrorism expert, claimed in an interview with ISN Security Watch on Friday.

Mark Tempest
The main focus of this blog is maritime security. Other matters may appear. I am a retired attorney and a retired Navy Reserve Captain (Surface Warfare). Opinions expressed herein are my own. Sometimes I have the experience to back them up. Your opinions may vary. Don't panic. Feel free to disagree, that's what free speech is all about. Nothing contained herein should be confused as me giving legal advice to anyone. If you are confused, welcome to the club. All mistakes herein are my fault. I have sufficient academic credentials to be dangerous to myself and to others. Comment moderation is at my discretion, so your comments may never appear. You can start your own blog for free and comment there all you want. I enjoy a healthy debate, but not arguing with trolls. If you can't comment without using intemperate language, go someplace else., Under the header: USCGC Adak (WPB 1333), right, and the Navy coastal patrol ship USS Squall (PC 7) move into formation during an Arabian Gulf exercise. (U.S. Navy photo by MC3 Louis Thompson Staats IV)