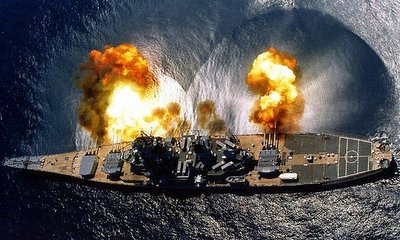 The drum beat for some sort of lingering battleship presence goes on, as seen in Marines fear scuttling battleships :

The Navy high command is determined to get rid of the battleships, relying for support on an expensive new destroyer at least 10 years in the future. This is how Washington works. Defense contractors, Pentagon bureaucrats, Congressional staffers and career-minded officers make this decision that may ultimately be paid for by Marine and Army infantrymen.

Marine desire to reactivate the Iowa and Wisconsin runs counter to the DD(X) destroyer of the future. It will not be ready before 2015, costing between $4.7 billion and $7 billion. Keeping the battleships in reserve costs only $250,000 a year, with reactivation estimated at $500 million (taking six months to a year) and full modernization more than $1.5 billion (less than two years).

The battleships are gorgeous to look at, but we would have to rebuild the entire industrial infrastructure that created and supported them, so reviving them would be problematic. The spare gun tubes and liners were discarded in the late 1990s and we no longer have the capacity to build new replacements. The amunition is WWII vintage or older and would have to be refurbished. Most of the companies that built their systems are nearly forgotten, such as Studebaker (winch and hoist componants), or no longer build things of that sort. Manpower demands for the engineering plants are huge, controlled superheat 650 psi boilers require large watch and GQ teams, not to mention the fact that these systems have been out of the inventory for a long time (I served on a heavy cruiser of the same vintage and am painfully aware of these problems). It would simply be less expensive, in the long run, to build a new class of ship with greater flexibility and more modern systems. They were pretty (I've seen them at sea), but sadly, their day has passed.

I'm not sure the DDX is the right ship, but then again, I'm not sure how much demand there is for Naval Gunfire SUpport missions, either.