Where the French are working with us - CTF 150 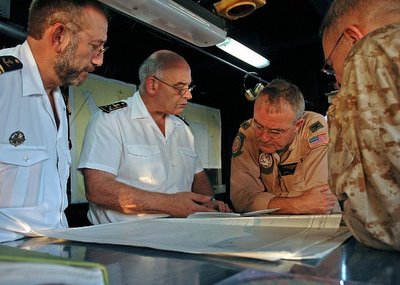 ESG 8 is on a six-month deployment in support of maritime security operations (MSO).

CTF 150, which was established near the beginning of Operation Enduring Freedom, is comprised of navies from Germany, France, Pakistan and the United States, under the direction of U.S. Navy Vice Adm. Patrick M. Walsh, Combined Maritime Forces Component Commander (CFMCC).

CFMCC oversees MSO in and around the Persian Gulf, North Arabian Sea, Gulf of Oman, Gulf of Aden, parts of the Indian Ocean and the Red Sea.

Mazars expressed his appreciation for the warm welcome from ESG 8 Sailors and Marines, and said he looks forward to working with the members of the strike group as they conduct MSO in the region.

You may remember that the arrival of the French fleet off Yorktown that helped convince the British to surrender during the American Revolution. Battle of the Capes, anyone?