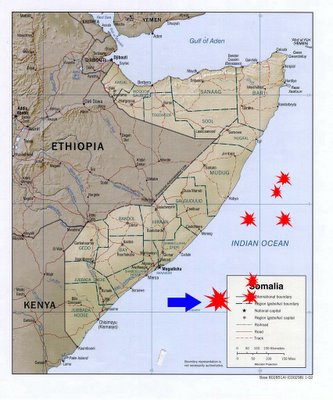 The Kenyan port of Mombasa is scrambling to counter an international campaign to have the Somali Coast declared a "war zone" by shipping organisations, a move which could cost the facility billions of shillings every year.

The influential British shipping union NUMAST, the International Transport Workers Federation and the International Maritime Bureau have launched the campaign in which ships coming to the port and to other southern destinations will be travelling under armed escort. This is expected to send insurance, freight and shipping charges up sharply.


The British union is pursuing the issue both at the United Nations and with the international shipping industry following the rise in the number of piracy incidents off the Somali coast over the past six months. The last incident was the attempted hijack of the cruiseship Seabourn Spirit last month.

If the area off the East Africa coast is declared a war zone, ships and freight companies will be forced to take on insurance and contigency plans similar to those required of vessels travelling in combat zones or in waters that are mined. About 25 ships that dock weekly at Mombasa pass through Somali coastal waters.

Of course, union members may get more money for sailing through a "war risk" zone. A pretty low risk war zone, at that, at least for larger vessels. Map shows rough locations of recent pirate attacks. The most recent is not shown, but apparently is in the same southeast coast vicinity as most of these. The blue arrowpoints to the area of the attack on the cruise ship that recently has sparked a good deal of interest in the Somali coast.
Posted by Mark Tempest at 12/06/2005 07:06:00 PM