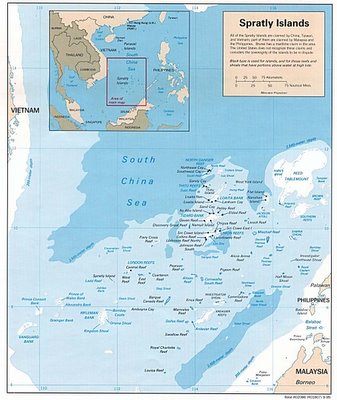 Reported on and editorializedabout here, a direct confrontation building between Taiwan and China:

In mid-March, the national oil companies of the Philippines, Vietnam and China signed an accord to conduct research in the Spratly Islands for economic purposes. Last month, China signed a communique with Vietnam to state that the agreement was an important contribution to realizing the aims of ASEAN's Declaration on the Conduct of Parties in the South China Sea, bringing about greater stability and harmony to the region.

China and Vietnam also agreed to provide active support for companies operating in the area to ensure that the agreement was adhered to, and that cooperation could achieve rapid results.

China followed this with a series of declarations signed with other nations stating that the South China Sea had become a "sea of peace, amity and cooperation." Taiwan, of course, was ostracized from all of this. For Taiwan, the South China Sea is not the sea of cooperation, but one of infractions of its territorial rights. It is not a sea of friendship, but a sea of animosity from which Taiwan is being driven. If Taiwan does not act to counter this, all rights to the area will be given away.

Now that construction of the landing strip has been confirmed, all agencies involved should actively cooperate and look more closely at ways of protecting the nation's territorial claims in the South China Sea. This will be necessary if we are to pave the way for effectively exploiting its resources, maintaining secure air links and maritime security and finding an opportunity to participate in regional dialogue.

We should also pay attention to the response of countries in the region, especially China, Vietnam, the Philippines and Malaysia.

In addition, Taiwan should strengthen its defense of Ita Aba and give considerable thought to whether the navy should again assume this duty, or whether a coast guard detachment should remain at its post.