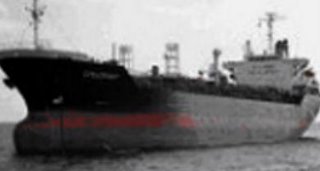 Reported here, the missing chemical/vegetable oil tanker Steadfast has been located and is now in Singapore:

ONE of the largest ships ever hijacked has been found in Indonesian waters after five days.

The Steadfast (above) went missing on Dec 19.
Action by the region's law enforcement agencies led to the recovery of the Steadfast and its crew.

Hunted throughout South-east Asian waters, the pirates had apparently turned the tanker back towards Indonesia and left the vessel on 24 Dec when it was in Indonesian waters.

The ship's master brought the Steadfast safely back to Singapore, arriving at 1.30 pm the same day...

...The Steadfast was seized by pirates shortly after leaving Palembang in Indonesia for China with a cargo of 16,585 tonnes of vegetable oil - which was probably the pirates' target.

The director of the International Maritime Bureau, Capt Pottengal Mukundan, told BT: 'The 25-strong crew, the vessel and its cargo are safe.

'It was vital the authorities deal with this hijacking effectively to deter further attacks of this kind.

'We congratulate the law enforcement agencies, particularly the Indonesian Navy, for their prompt and positive support.

'We believe it was the action taken by them which dissuaded the pirates from proceeding with the illegal discharge of the cargo.'