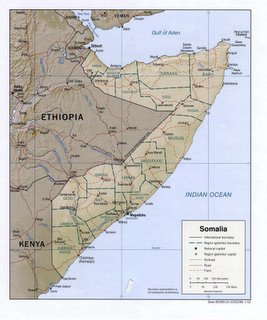 Recently released Somali pirate captives are properly concerned that there could be a repeat of their capture on the way home:

Ten sailors held at sea by armed pirates for 52 days arrived safely in Somalia but said on Thursday they feared their ship could be hijacked again on the journey back to Kenya.
The Kenyan-owned freighter MV Torgelow, carrying 850 tonnes of general cargo to Mogadishu from the Kenyan port of Mombasa, was released by Somali pirates on Wednesday and is now docked in El-Maan port, near the battle-scarred Somali capital.
"The nightmare is over. We are very happy," said Desilva Eckman, captain of the Torgelow...

..."We are afraid to sail back. They might decide to take us, but since we have to return the vessel, we have no option," Torgelow's Chief Engineer George Mutiokoh told Reuters by phone.
The 10 crew, a Sri Lankan captain and nine Kenyans, said the pirates did not physically abuse them but the ordeal had nonetheless traumatised them.
"The pirates never mistreated us, but they frequently frightened us by pointing guns at our heads," Mutiokoh said.
"We were held at sea for all those 52 days," he added. "Nobody has ever pointed a gun at me. It was horrible and I thank God for saving me."

Strategy Page has some thoughts on the politics involved is stopping these pirates here:

The proposed cure for the Somali pirate problem has some interesting undertones. An American security firm has been hired, for two years, to patrol the Somali coast and eliminate the pirates. They will probably get some help from the U.S. government. CENTCOM (the American military command that deals with events in the region) has monitored the activity of the Somali pirates closely. There are daily intel updates about it, and U.S. Fifth Fleet devotes a lot of intel to it. Overhead (aircraft and satellites) provides great info. The locations of the captured vessels are known, as are the sites of the pirate bases, which are also known is some detail. Apparently the pirates have actually been seen in the act.

There's more than enough info for SEALs or other American special operations forces to take action. So the question is, why not act? ...

... Finally, Somalia and "Another Mogadishu," are political hot buttons. No one in DC wants to take the heat for allowing another swing at that tar baby. Spending $60 million to let contract security folks go after the problem seems a safer approach. Maybe the Germans are paying for it was well. One can make a case for NATO doing the anti-piracy work, as there is no taint of Iraq about it, and these pirates have harmed Europeans.

It all seems like good, creative thinking on someone's part. If it works, great. If not, well, it was worth a shot across the pirate's bow.