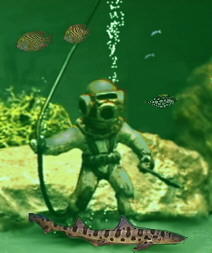 Indonesian navy divers have discovered a shipload of refined tin worth $4.7 million that was hijacked by pirates late last month, and the owner -- PT Koba Tin -- is salvaging the cargo, officials said on Thursday.
The vessel M.V. Prima Indah, which was carrying 660 tonnes of tin produced by Koba when it was attacked en route to Singapore, was spotted last week on the sea bed off Bangka, the Indonesian island where it began its journey.
Crew members were unharmed but the incident was the second tin seizure in Indonesian waters this year. On the same route in April, pirates hijacked a cargo of at least 575 tonnes, estimated to be worth about $4.6 million and since retrieved by its owner.
"We don't understand why the pirates sank the ship. There are a lot of questions but we cannot speculate," said Noel Choong, who manages the International Maritime Bureau's Southeast Asian piracy reporting centre in Malaysia.

My guess is they were going to come back for the cargo later and slowly pick the sunken ship clean. Any better thoughts?

(Diver is not a real person and is offered solely for illustrative purposes. And, incidentally, can be purchased from Tin-Soldier.com).
Posted by Mark Tempest at 10/20/2005 04:17:00 PM