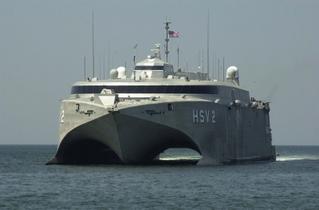 Reported here, a member of the Philippine house has decided to take on the United States:

Virador said no foreign vessel is allowed to enter the Philippine coastal territory, adding that even local security officials were unaware there was a US ship in Philippine territory.

"What is the US ship doing here? I believe that even the Philippine security officials are unaware of its arrival. Is this part of the anti-terror campaign of the government? Or is this another covert operation between the US and the government which the Filipino people are not aware of?" asked Virador.

Last Tuesday, a US military ship, escorted by a small gunboat, was spotted off Zamboanga. However, spectators failed to identify what class the vessel was except that a US flag was hoisted on the deck.

The Department of Foreign Affairs (DFA) and the Armed Forces of the Philippines gave different explanations about the mission of the US military ship.

But both agree there was nothing unusual or illegal about the presence of the US ship in Philippine waters.

DFA spokesman Gilberto Asuque identified the ship as the USS Joint Venture, a commercial vessel chartered by the US military to carry cargo.

Asuque said the US had sent a note to the foreign affairs department on October 3 requesting that the ship be allowed entry to Philippine territory and dock in Subic so it could load "humanitarian cargo" such as school building materials that would be used for Project Bayanihan in "various areas in Mindanao" starting at the end of the month.

He said it is the HSV 2 (High-Speed Vessel) Swift, an 11,000-ton double-hulled craft on the way to take part in a new Balikatan exercise in Mindanao.

The US embassy said there was nothing irregular about the presence of the ship, since "US vessels routinely transit through international waters (near) the Philippines, participate in bilateral exercises, and stop at ports for friendly visits, rest and re-supply."