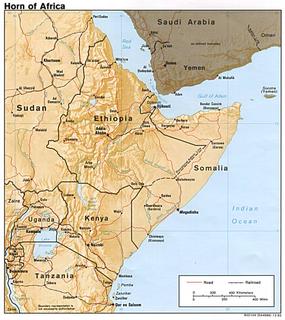 Building up to attack Yusuf’s forces is an array of scary men in Mogadishu. In the lawless city I found that Islamic jihadis of al-Ittihad al-Islamiya (AIAI) have recently gained a significant foothold. Backed by rich businessmen, they have established a network of Islamic courts with up to 3,000 recruits.

AIAI’s leader, Shaykh Hassan Dahir Aweys, has declared jihad against ‘the devil’ Yusuf. Aweys occupies a compound next to the colonial-era Italian cemetery, where his militias dug up the bones, tossed them into the street and then constructed a mosque over the site.

In a bizarre twist the jihadis have now formed a loose alliance with warlord gangs whom the CIA has bankrolled to capture Islamic extremists. These are the thugs that American troops once battled to overthrow, who are making far too much money from the war on terror to want an end to anarchy.

Last month in Somaliland — the relatively stable breakaway region that covers the part of Somalia formerly ruled by Britain — the authorities fought a long gun battle with militants they claim are al-Qa’eda operatives. Eight were arrested and the house they occupied was found to contain explosives and heavy weapons. It appears that their objective was to disrupt the region’s elections and kill poll observers and international aid workers.

This is the latest vindication of Western fears that Mogadishu could grow as a base for Islamic extremists. Al-Qa’eda members used Somalia as a base when they were planning bomb attacks against the US embassies in Kenya and Tanzania in 1998. The same happened when terrorists passed through Somalia on their way to bomb the Israeli Paradise Hotel in Mombasa in November 2002. The same day they also narrowly missed blowing up an Israeli charter flight out of the same city.

In 2003 British Airways suspended flights to Nairobi and Mombasa for six weeks. Reports emerged of a plot hatched by Somali-based al-Qa’eda terrorists to break through the fence of a Kenyan airport with an explosives-laden truck designed to detonate beneath a taxiing BA jumbo jet. Another alleged Somali plot was to fill a Cessna small aircraft with a bomb known as the ‘hippo’, which would be flown out of a Nairobi airport and piloted into the brand new US embassy rebuilt to fortress standards since the last one was demolished.

Now this year, Yusuf’s counter-terrorism chief told me, foreign terrorists were planning fresh attacks throughout eastern Africa. He said they felt so secure and protected in Mogadishu that they had even married local girls and were raising families. ‘They will kill anybody who disagrees with them.’ He pointed at me. ‘And they will kill any white people they find like you, too. They will know you have arrived as soon as you land at the airstrip.’

A hulking UN-chartered cargo ship, docked at a port in Somalia this week, was halfway finished unloading its 850 tons of corn and rice when a band of gun-toting bandits stormed aboard and forced the crew to take the ship to sea.
It was the second hijacking of a UN food-aid ship in four months in Somalia. Some 78,000 people may go hungry if the situation isn't resolved soon. But more than that, it's an example of how difficult it is becoming to get food to Africa's hungry masses in ways that are safe, efficient, and effective. And it's one more reason why there's growing pressure for major changes to the massive global food-aid system, which is funded by US and other wealthy-nation taxpayers.

And more from the Kenyan point of view :

Some foreign governments used to police the Coast of Somalia near Al Maan, but their withdrawal is reported to have worsened the situation.

Since the Somali waters became dangerous, the International Maritime Bureau, through its Piracy Report Centre based in Malaysia, posts regular warnings to ship owners globally.

The IMB has frequently warned ships on transit to keep 50 miles away from the Somali Coast.

But reports from Somalia indicate that the organised gangs have powerful boats that go out as far as 100 nautical miles away from the shore.

It is suspected that warlords from Puntland in Somalia are behind sea piracy as a major source of revenue.

Assistant minister for Immigration, Anania Mwaboza, says the Government is seeking the release of Mv Torgelow and investigate why Kenyans have been the target.

Kenya is also investigating whether the captors are linked to the transitional government or are criminal element taking advantage of the lawlessness in that country.

The MV Miltzow was sighted yesterday off the small fishing port of Brava, about 50 miles south of Merca, which is a known refuge of a local militia gang. The hijackers usually demand a hefty ransom for the return of the crew and vessel, but always keep the cargo. If the owners do not pay, the crew may be held hostage for months and even killed.

Three Taiwanese fishing vessels and their crews have been held hostage on an island off the southern port of Kismayu for nearly six months.

The increased number of attacks is blamed on previous pay-offs and a decline in opportunities for criminal activity elsewhere as aid organisations have reduced their onshore operations because of the lack of security.

The International Maritime Bureau describes Somalia’s piracy problem as “the most serious in the world”. It reports that there have been 21 incidents off the Somali coast since March 15, making it as dangerous a stretch of water for piracy as the infamous Strait of Malacca in the Far East.

Since the fall of the dictator Mohamed Siad Barre in 1991, Somalia territory has been carved up between rival warlords and their militias. And since the start of the US-led war against terrorism, radical Islamic fugitives, some from Yemen and Afghanistan, have made Somalia even more dangerous for Westerners.

Weapons used in bomb attacks in Kenya and elsewhere in East Africa have been identified as having come from Somalia. Three East African suspects in the attempted London bombings of July 21 all had links with the country. Recent violence on the Indian Ocean island of Zanzibar has also been linked to Somalia.

Unscrupulous fishing companies, many with connections to Japan, China and Taiwan, have for years paid backhanders to Somalia’s regional warlords for the right to fish the waters off their respective fiefdoms. Flush with easy pickings from that trade, warlords recently began seizing commercial vessels.

The MV Torgelow, a cargo ship, was seized on Monday off the southern Somali coast as it headed north towards the ruined capital and main port of Mogadishu. Its fate is not yet known.

Kinda makes you think something is going on.

And then, of course, you have the threat. Those are the challenges. You have your sovereign boundaries, you have your tribal, you have your religious, and then, of course, you have your terrorist threat. Coming from Yemen you have the al Qaeda. Down into Somalia you have the al Qaeda network and associated movements. Then you have AIAI. And I blow this constantly -- it's al-Ittihad al-Islami; and then put an "O" at the end of it for Ogaden, and now you have the AIAI, AIAIO. And within the Ogaden, you also have the ONLF, which is Ogaden National Liberation Front. A little bit to the left there you have Oramean, which is the OLF, the Oramean Liberation Front. Up into Darfur you have the Jinjaweit; you have the Lord's Resistance Army, and of course you have the unrest along the Eritrean-Ethiopian border. You also have the seam that exists, which is the 12-mile limit. If you were to stand at high tide and let the water lap up at your ankles and then face about, I own all of that; what's behind me, I don't own. You're not allowed within 12 nautical miles of land; therefore, there's that gap that exists. That's -- the lower right-hand corner is the embassy, 1998.

Next slide, please. This is my mission statement. I have operations and training. I conduct CMOs, Civil Military Operations and Civil Affairs Operations. And I also conduct training within the CJTF-HOA. It's to combat terrorism, and to establish a secure environment and regional stability. You can't have any type of peace, you can't have any type of prosperity without security and stability, and that's our goal.