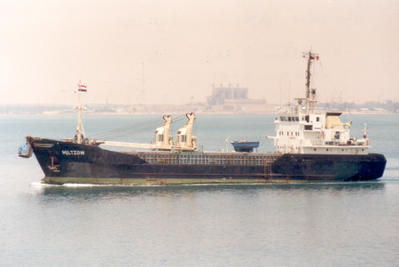 Somali pirates have hijacked a second ship carrying United Nations food aid in the latest act of piracy to strike vessels plying the anarchic country's treacherous seas, the world body said on Thursday.
Six gunmen stormed the MV Miltzow freighter on Wednesday as its cargo of 850 tonnes of food aid was being offloaded in the port of Merka, 100 km (60 miles) southwest of the capital Mogadishu, the U.N. World Food Programme said.
Aboard were the crew of 10, including a Kenyan captain, Ugandan engineer and eight other Kenyans, WFP added.
The hijacking came 10 days after pirates released another ship laden with WFP food aid, the M.V. Semlow, which they seized at sea and held for nearly 100 days...
...Wednesday's capture of the Miltzow is the third time pirates have struck the Mombasa, Kenya-based Motaku Shipping Agency, which owns the two ships hired to carry WFP food aid and a third stormed by pirates over the weekend.
The third ship, the M.V. Torgelow, had been headed to the Somali port of El Maan carrying fuel and supplies to restock its sister ship the Semlow when it was taken.
The Semlow has yet to unload its cargo of 850 tonnes of rice destined for victims of the Dec. 26 tsunami. A dispute with El Maan port authorities has prevented the return of its exhausted 10-man crew to Mombasa, WFP said.
Motaku typically runs about two voyages a month to Somalia, but may abandon the route because of the risks.
WFP said it is considering sending food aid overland through Kenya and Djibouti since shipping firms now want armed escorts.

Image of what I suspect is the MV Miltzow from here.

UPDATE: Some unpleasant truths about the Somali pirates (and some hyperbole):

Their motives appear to be purely profit centered although many claim to be enforcing the sovereignty of Somalia's territorial waters in the absence of a formal navy or coast guard.

"There are pirates who are flatly sea robbers, others claim to be protecting Somali waters from overfishing and dumping of toxic material," said Andrew Mwangura of the Seafarers' Assistance Programme in Mombasa, Kenya, home port to at least two recently seized vessels.

"Others are hired to hijack ships for revenge," he said.

"The whole issue of piracy is about money and control of certain portions of the sea."

Mwangura and other industry sources say the pirates have grown bolder and more successful because they have stationed accomplices in various East African ports to notify them of ship departures and expected times of passage through Somali waters.

While not always successful and occasionally beaten off by crews with the help of passing US warships, the hijackers have claimed numerous prizes, holding vessels for months until their demands are met or negotiated down.

A group of pirates based near the town of Haradere, about 300km north of Mogadishu, held a Mombasa-based ship transporting World Food Programme (WFP) aid for Somali tsunami victims for nearly three months before abandoning it in early October.

While the WFP denies paying any ransom, local residents say it is likely money changed hands during negotiations with the Somali owner of another ship commandered by the same pirates in September.

"The pirates have collected millions of dollars in ransom since [1991]," said Abdi Aden Mahad, a businessman in Bossaso, the main port in the northern Somali enclave of Puntland.

"It's the best income-generating business I've ever seen," he said.

At least three well-known former pirate chieftains who have made fortunes from ship hijackings live in the Puntland fishing village of Marreray, according to local residents.

"They are now married and have decent lives without any fear or asking for forgiveness," said Marreray villager Abdi Mohamed.

"The warlords are powerless, they cannot do anything about piracy," said Mire Hassan Ibrahim, a trader in Somalia's bullet-scarred capital of Mogadishu. "They have failed to pacify the land let alone the sea."

"These pirates are very rich and could kill or overthrow a warlord who tries to expand his control offshore," he said.

A tussle between pirates and warlords has kept three hijacked Taiwanese commercial fishing vessels in captivity for more than two months off the southeastern port of Kismayo, about 500km from Mogadishu.

UPDATE2: Commentor Worker was kind enough to offer up this link which reports that the putative government of Somalia is asking for foreign help:

Prime Minister Ali Mohamed Gedi said in an interview with The Associated Press that his government — which has yet to take control of the country — does not have the resources to protect shipping along Somalia's coast.

Gedi said he would call for a meeting of every country that has an interest in securing Somalia's shipping lanes to organize an interim force to protect Somalia's waters.

Somalia's 1,880-mile coastline is Africa's longest, and the country has had no effective central government since opposition leaders ousted dictator Mohamed Siad Barre in 1991. They then turned on each other, transforming this nation of 7 million into a patchwork of battling fiefdoms ruled by heavily armed militias.