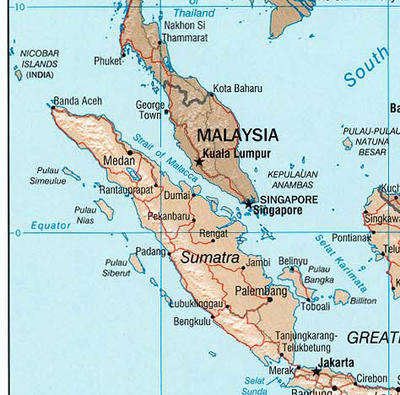 For a long time, much of the piracy in the Strait of Malacca was focused on local shipping and simple robbery at sea. But after a couple of seizures or attempted seizures of larger international ships, the focus of the international shipping world and of many of many of the countries that depend on this vital sea lane began to focus on "helping" the littoral states solve their piracy probelm. The underlying concern is, of course, that some terrorist group will find a way to close the Strait, hinder shipping, or do harm to major ports in the area, like Singapore. Such efforts to be helpful have generally been in vain, except with this encouragement and some aid packages, these states have stepped up their own efforts and have begun to engage in joint operations to quell the pirates of Malacca. Japan, Australia, the US, and China have all offered patrol help. All have been rejected for the most part, and issues of sovereignty and territorial waters have dominated the discussions... On the other hand, piracy seems to have slowed in the area.

Now, however, there is this article, which discusses some underwater proposals:

Citing the threat of terrorism, U.S. Navy submariners have been clamoring for years to get permission from neighboring countries to patrol the straits, which have been plagued by piracy around the Singapore Strait section, where the waterway narrows to only 1½ miles wide.

Last year, a proposal by the head of the Navy's Pacific Command suggesting the U.S. could work with surrounding countries to collect intelligence and patrol the straits was met with angry rejection by all except Singapore.

So far, Malaysia and Indonesia have declined to let in the Navy.

Now, the three countries' navies handle the patrols. China is also interested in security in the straits because nearly all of the country's imported oil and 60 percent of its total supply pass through the region.

China has recently been working on military cooperation with Indonesia, and some Asian newspapers have reported China negotiating to build a submarine base there.

The Navy continues to work with Singapore on maritime security systems for the region. Starting in 2004, 21 students at the Naval Postgraduate School began a study focusing on ship and port security in the straits. The group also designed systems to better detect explosive and dangerous materials aboard cargo ships. This year, 26 students came from Singapore to work with the Naval Postgraduate School on the project.

The Defense Department is now interested in using small unmanned submarines in the region. These autonomous undersea vehicles, or AUVs, weigh only about 500 pounds and are especially useful for finding underwater mines.

Since 1987, the Naval Postgraduate School has built three unmanned underwater vehicles, and has tested them in Monterey Bay.

One problem the military has with AUVs is that they don't work well in groups and often crash into each other. This year, Navy school students have been working on finding solutions to that problem.

Thes Navy students might want to talk to DARPA (and Stanford and Carnegie-Mellon Univeristies) about autonomous vehicles, as they seem to be working on parallel lines for vehicles ashore. There might just be some sharable ideas.