Security measures were beefed up at the Cebu International Port (CIP) following intelligence reports that Cebu would likely be a target of underwater bomb attacks by terrorist groups.

Captain Elson Hermogino, Philippine Coast Guard in Central and Eastern Visayas District commander, said they would coordinate with the military and the police to secure the ports and thwart any terrorist attempt.

"For the Coast Guard, we really don't have the technical capability but with the help and coordination of the military and police, we can counter that," Hermogino told the Inquirer.

"Aside from the harbor patrol, we are also checking the physical activities in the waterside area of the port," he added.

Hermogino said that based on the intelligence report, the target of the underwater bomb attacks were the military, naval and commercial vessels.

He, however, declined to give details on the report, especially which group would most likely stage the plan.

Hermogino, however, said the intelligence report was three-months old and came from military sources. 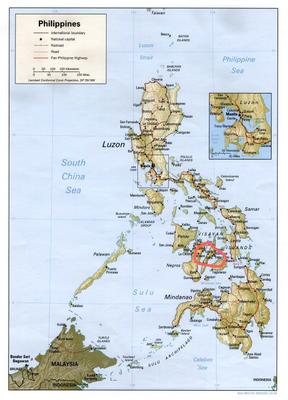 Froggy over at Froggyruminations has previously discounted the underwater threat here, and notes that the "underwater threat" reappears "Every six months..." That was in April 2005, so we seem to be right on track...

My earlier posts (also April 2005) are here and linked therein.