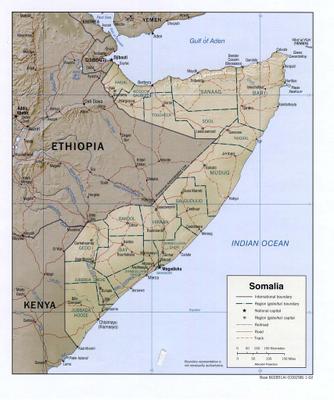 A search was under way yesterday for a Greek-owned oil tanker that has not been heard from since it sent out a distress call on Thursday evening off the coast of Somalia.

The Maltese-flagged San Carlos, captained by a Greek with a crew of 24, sent out the signal from a location around 170 nautical miles off the Somalian coast, the Merchant Marine Ministry said.

UPDATE: Earlier reports on Panagia here and here. Ukraine has asked for international military help in recovering the Panagia. All 22 members of the Panagia crew are Ukrainian.

UPDATE2: The Somalia government has also asked for help in supressing the pirates as reported here:

on Saturday for international help to combat pirates, who have used speedboats, automatic weapons and satellite phones to target UN-chartered ships and other vessels.

The appeal came a day after the International Maritime Bureau reported an alarming increase in attacks off the southern and eastern coast of Somalia and appealed to US and Nato warships in the region to protect vessels sailing near the Somali coast, an important shipping route connecting the Red Sea with the Indian Ocean.

Pirates have launched 23 attacks against ships off Somalia since March 15, the London-based International Maritime Bureau, which tracks piracy around the world, said on its website.

Somalia has had no effective central government since opposition leaders ousted dictator Mohamed Siad Barre in 1991. They then turned on each other, transforming this nation of seven million into a patchwork of battling fiefdoms ruled by heavily armed militias.

A new transitional government, formed during lengthy peace talks in Kenya, is struggling to establish itself in Somalia as it faces internal divisions and opposition from Islamic militants and warlords who benefit from ongoing anarchy.

"Until we establish our own marine force, we want neighbouring countries to deploy their navies to protect Somalia's coastline against the pirates," Mohamed Ali Americo, a senior official in the Somali prime minister's office, said as the 10-member crew of a UN-chartered ship arrived in Kenya following a 100-day hijacking ordeal.

With the San Carlos seizure, the number has climbed to 24 attacks...

UPDATE3: The World Food Program ships once held by the Somali pirates have finally arrived to safety in Kenya.

UPDATE4: WFP (and nearly everyone else) seeks coalition warships to help food ships get safely to port and back:

The WFP official said the agency was glad that the crew had arrived. Said Velden: "It is great joy, especially for the eight Kenyans who have been missing their families for almost four months now."

He said it was crucial for the coalition forces to resume patrols on Somalia’s territorial waters to eliminate increasing incidences of piracy.

Velden said this had affected the agency’s plans of ferrying relief supplies to Somalia where millions of famine stricken people are suffering.

"International marine forces must intervene if WFP is to save lives in the war-torn country," Velden said.

"The whole country is in celebration following the arrival of Chief Engineer Juma Mvita who had been held by Somali warlords since June.

"We hope that the international community will provide armed escort to ships which ferry relief supplies to Somalia to prevent further hijacking of ships and their crew members," said Mr N M Mboyi, Tanzanian High Commissioner.

The Sri Lanka High Commissioner also reiterated the call to the UN to provide security to vessels, which transport relief food to Somalia.