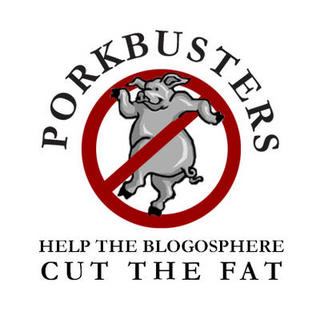 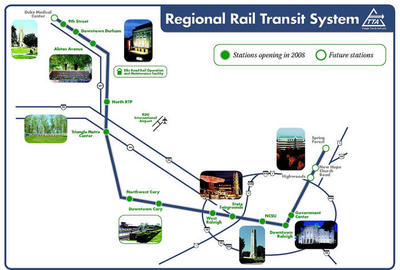 The Raleigh News & Observer, long known as the newspaper of the North Carolina Democratic Party line and the liberal establishment, has recently run a 5 part series on the proposed regional rail system starting with Triangle trains: Off track? explaining how the cost of the proposed system (on which $43 million has already been spent) has escalated from $100 million to $759 million and is in trouble because the Triangle Transit Agency has been unable to cook the estimated rider levels enough and then blames the problem on the federal government, which is supposed pony up 60% of the cost:

The Triangle Transit Authority wants to build the $759 million system. But TTA is struggling to answer rigorous questions from federal officials about predictions of how many people will ride.

And just as construction was planned to start, Washington changed the rules this year, setting a higher standard for cost-effectiveness than the project was ever designed to meet.

U.S. Rep. David Price has long been a backer of Triangle rail. John D. Claflin, TTA's general manager, wants Price or Sen. Elizabeth Dole to get TTA an exemption from new federal rules -- a break given to some others.

The rail project's fate now rests on the answer to a simple question: Will building rail in the Triangle be worth it?

The project is behind schedule, and more delays appear likely.

TTA missed a key deadline last week to produce the new ridership forecasts. Federal officials gave the agency until Oct. 14 to finish the work and have the project considered for President Bush's next budget.

No dirt has yet been turned, although TTA has spent nearly $43 million acquiring land and access to an existing railroad corridor.

The project's cost has ballooned from a 1994 estimate of about $100 million to a new estimate of $759 million.

Even at that price, the 28-mile route would be seven miles shorter than its backers have long wanted, a reduction that saves money. Four stations were cut, three in North Raleigh and one at Duke University Medical Center.

For now, federal authorities have held up approval of most of the money needed for the project, more than $400 million. The brakes have been on the Triangle's plans since late last year....
...TTA's ridership forecasts were "unexpected and unexplainable," according to a memo written Aug. 1 by Jennifer L. Dorn, administrator of the Federal Transit Administration.

To judge the Triangle plan, Dorn's staff members will apply a formula that weighs the cost of the project against how many people will ride, and how much travel time they will save. The result will determine whether the project is recommended for federal money -- or whether TTA must cut millions from its plans and try again.

Congress makes the final decision, acting on advice from the Federal Transit Administration.

John D. Claflin, TTA's general manager, said the effort to reach an acceptable cost-effectiveness number amounts to a mission to save the project as it's now designed.

"You either have the numbers or you don't," Claflin told TTA trustees in July. "That's all they care about. The only thing they're looking at is, really, what are your costs and what is your ridership?"

For the first time, Claflin is talking about possibly needing more money from Triangle taxpayers to keep the project on track. Previously, he and other TTA leaders have said that new local taxes would only be needed later to expand to North Raleigh and Chapel Hill.

"We have to start thinking about getting more local funds," Claflin said in a recent interview. "You come up with more local money if the federal government can't come up with that money for you."

I guess the idea of simply stopping this ridiculous project never occurs to these clowns.

The series continues with an expose of the overly optimisitic assumption that got this silliness started, such as the belief the companies owning existing rail lines would generously share their rails here:

The Triangle Transit Authority said back then that it would cost as little as $100 million to get trains rolling by 2000 from West Durham to North Raleigh through RTP, Cary and downtown Raleigh. But those plans carried a big assumption: that TTA would get free access to the existing tracks, which it could share with the freight trains.

The railroads did not surrender their interests for the sake of commuter rail. They extracted concessions that added more than $74 million in unexpected expenses, TTA says.

Surprised? What kind of research did they do in advance? Speaking of research, they haven't done much to ask potential riders about the need for the system, as reported here in the sub-headline, "Commuters have few reasons to ride in sprawling, parking-rich region"

Unlike most of the nation's local rail systems, the $759 million regional line proposed for the Triangle isn't designed to get people in and out of one busy downtown.
Instead, it would stretch for 28 miles, through two downtowns and a spread-out research park. Its path reflects the nature of the Triangle -- a sprawling collection of relatively small cities. Together, they form what would be the least dense region in the country to build a major local rail project.

But it's for the future and the $759 million is just the bare beginning:

But TTA chief John D. Claflin says that TTA's service will be more frequent than other commuter rails at times other than rush hours, which will help it attract more riders.

More than that, he said, the future holds promise for rail. He believes this region will embrace the chance to avoid highway congestion if it's available.

"We have to offer alternatives," Claflin said in an interview. "And we have to be prepared for the inevitable $80 a barrel for [oil], when only the rich can afford to drive, when your gas is $6 or $7 a gallon and you can't afford to commute."

A spread-out population isn't the only challenge to the success of rail in the Triangle. Others:

* Cheap, plentiful parking across the region. Many stops on the rail are near places with spacious parking lots, making it easy for commuters to drive instead of ride. The 60 major business locations in Research Triangle Park, for example, are surrounded by free parking lots.

* Small park-and-ride lots at the proposed TTA stations. Under current plans, the largest TTA parking lot would accommodate 444 vehicles. TTA would build a total of 2,000 park-and-ride spaces. Some cities have single lots that big.

* Few stations, long rides. At 28 miles, the Raleigh-to-Cary-to-Durham rail line is planned as one of the longest start-up commuter rail projects in the country. Covering all that ground while keeping within budget constraints means stations are fewer and farther between.

* Skipping numerous high-traffic locations. The system won't run to Chapel Hill, Duke University Medical Center, South Durham, Raleigh-Durham International Airport, North Raleigh or fast-growing eastern Wake County, at least not at first. TTA hopes riders from those areas will drive to rail stations, or get on a bus and link to the rail.

Meager beginning? It's a very large rat hole. And is being laughed at by some who it would allegedly serve:

"I don't think anyone is going to want to drive, ride a train, get on a shuttle, and then get to work," said Joshua J. Higgin, 30, a scientist at the National Institute of Environmental Health Sciences in RTP. "The people here, we make fun of it. The park is too spread out with big campuses for the rail."

The next article in the series deals with explanations as to why there are allegedly "no alternatives" to the rail system for getting 14,000 people out of thier cars. You know, except for all the other alternatives, like buses, HOV lanes, staggered work hours, and all those other silly ideas that woon't garner $400 million in federal money and open up the taxpayer wallets for more picking:

Other state and local leaders see no affordable alternatives, and no ready replacement for more than $400 million in federal rail transit funds the growing region could lose. No other approach, they say, offers Triangle residents hope for relief from a future of freeway gridlock and nonstop suburbia.

"It ain't gonna get any cheaper. But we need it," said W. Lewis Hannah Jr. of Holly Springs, a bank executive who represents Wake County on the Triangle Transit Authority board. "We're out of options here."

Yeah, gotta halt that "nonstop suburbia" at any cost...

The final installment is due Oct. 9.

But you can already feel the liberal elite establishment "Borging" ("resistence is futile- we know what is good for you"). North Carolina may have two Repubilican senators and vote for Republican presidents, but the pork roots run deep.