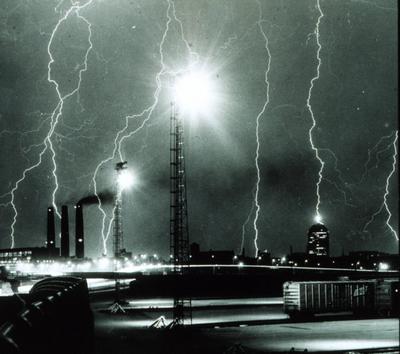 Hat tip to Drudge for pointing this wonderful article out: from the Washington Post:World Helpless Against Assaults of Nature

In a more hopeful time, buoyed by the promise of science, it was thought hurricanes could be tricked into dispersing, earthquakes could be disarmed by nuclear explosions and floodwaters held at bay by great mounds of dirt.

Such conceits are another victim of a year of destruction.

Wait, I though global warming, allegedly caused by man, was... or how about the Russian Weather Machine being operated by the Japanese mafia? Or the US weather machine up in Alaska? or... the Tesla earthquake machine?

Wacky anthropomorphication is also a problem; "Why is nature so angry?" it asks here as if man has somehow ticked off Mother Nature by making margerine taste like butter.

Of course, US hegemony gets trotted out, too, in the death toll blame game:

Research findings of Yale, California and Penn State Universities converge on the probability of a 1600 km. rupture of the crust along the Indo-Australian plate boundary; with the major March 30th. quake not just an aftershock, but ‘a new rupture of an adjacent segment of the fault’. On 23rd.July, Times of India reported that a Columbia University researcher having access to the December event sound tracks, felt as if ‘the earth was ripping apart along the fault’. These sound tracks were recorded at the US Diego Garcia Base, 2500km from Sumatra. The Base was established to monitor nuclear explosions for the Comprehensive Nuclear Test Ban Treaty. This vital information about the earthquake and tsunami’s advance were not immediately relayed to the affected Asian Nations, which could have saved thousands of lives. Such is the stranglehold of US hegemony ! Believe it or not there are no monitoring stations in the vulnerable South Asian region. !

Oh, and don't forget the meteor and asteroid threat. And, uh, the sun going super nova, and snakehead fish.