As we all know, October 10 used to not be celebrated because no one thought much about it. Oh, sure, in 1792 there was some recognition of the 300th anniversary of "Make Indigenous People Irritated & Liberals Feel Guilty Day (MIPIALFGD)" but not until President Benjamin Harrison in 1892 was MIPIALFGD made an official holiday (all reported here, though the discussion relates to something known as "Columbus Day" (whatever that was). MIPIALFGD is still thriving in some areas and even attracts known liberal irritants like Justice Scalia. 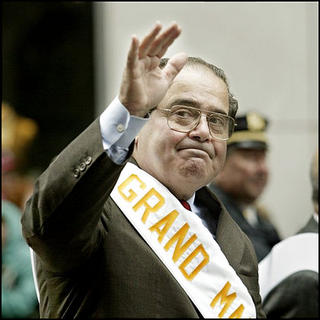 Trying to horn their way into MIPIALFGD are gay activists who seem to be unhappy with Justice Scalia.
Posted by Mark Tempest at 10/10/2005 09:32:00 PM