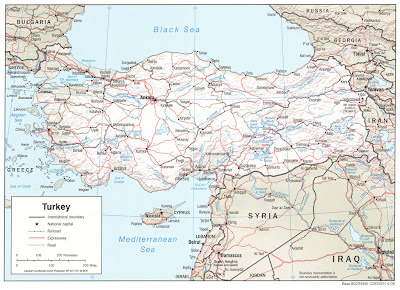 A Washington Post piece reprinted in a Turkish paper as Al-Qaeda's Hand in Istanbul Plot:

By then, Aktas was in Syria with other organizers, one of whom crossed the frontier with a load of underwear meant to make him look like a merchant headed to market. They made their way to Aleppo, where Sakka, the Syrian al-Qaeda man, had a house. Hiding in it, they cheered the televised coverage of the bombings. They laid low for five months, then made their way into Iraq, according to evidence from two suspects interrogated in Iraq's notorious Abu Ghraib prison.
In Iraq, Sakka served as a senior lieutenant to Abu Musab al-Zarqawi, the Jordanian-born leader of the insurgent group al-Qaeda in Iraq. Sakka, his features altered by plastic surgery, was captured in the Turkish resort town of Antalya while allegedly making final preparations for an attack on a cruise ship. He apparently planned to survive by escaping on an underwater scooter.
The Abu Ghraib prisoners said Aktas later died in Fallujah, scene of repeated fighting between Sunni insurgents and U.S. troops.