Sacred ground: Should be an untouched war grave 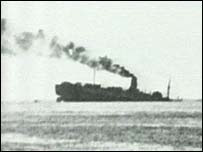 WWII. British troops trying to get off the Continent at Dunkirk. The British troop ship HMT Lancastria, loaded with 6000-9000 soldiers and others gets bombed by the Germans. 4000+ die, 2477 survive.

Now, some of the survivors are tyring to prevent exploitation of the wreck, as reported
here:

Next week Mr Brown will hand over a petition, which currently has about 3,500 signatories, to ask the government to designate the wreck a war grave under the Protection of Military Remains Act 1986.

The petition was set up by the Lancastria Association of Scotland, which campaigns to bring greater awareness of the disaster. It wants greater protection for the Lancastria after reports of divers visiting the wreck.

Mr Brown, 87, says: "It is sacred, it is a grave. I think it is disgusting to think of frogmen or whatever they are, going around messing with the ship."

Mark Hirst, from the association, whose grandfather Walter was another survivor, says: "The aim is to bring awareness of these people who made the ultimate sacrifice.

"It has been forgotten by history and we are trying to address that."

In May 2006, the French government placed a 200m exclusion zone around the wreck to discourage diving.