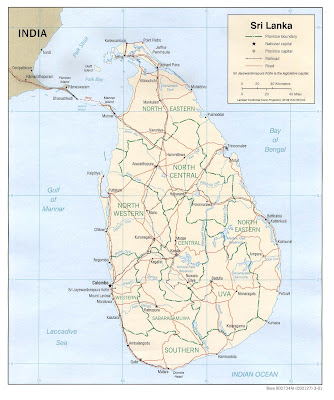 The medai war being waged by the Sri Lankan government against the Tamil Tigers goes on as seen in LTTE and cross border terrorism: threat to entire world:

From day one, LTTE has been involved in human cargo smuggling, illicit drug and narcotics operations, smuggling of arms to raise funds for their outfit. This has not been limited to Sri Lanka or its closest neighbours, but widely operated through their front organizations right around the world the latest being sea piracy, breaching all maritime laws and conventions.

LTTE's first cross border terrorist act was the assassination of Indian Premier Rajiv Gandhi on his own soil. Indian Courts found Prabhakaran and Pottuamman guilty of murdering Rajiv Gandhi. USA has recently under FIB Sting Operations, arrested 4 LTTEers and two Indonesians who were helping LTTE to procure arms in USA. Two Indonesians on the arms procurement operations have pleaded guilty and 4 LTTEers are awaiting judgement. It was also reported that FBI has trailed a deposit of $700,000 by LTTE as a down payment to procure arms. It is also a well known fact that LTTE agents in USA have attempted to bribe some congressmen to procure arms illegally.

On the other side of the world, there have been cases in India and most recently in Qatar. Indian Police recently arrested some arm dealers affiliated to LTTE from Tamil Nadu attempting to ship 6 tons of steel balls to manufacture claymore mines. Following this arrest, another arrest has been made by Mumbai Police, of LTTE attempting to ship equipment including 65 Japanese digital cameras for spying, 500 ball bearings, 21 camera lenses, 300 FM radio sets and other accessories valued at India Rs, 15 million. Four people were arrested including three from Tamil Nadu according to Indian media reports.

LTTE's most common form of terror is to hound any one who opposes the LTTE in any part of the world and kill them. They have planted hit-men in many countries to carry out these assassinations. Last week in Qatar, 5 LTTE cadres were sentenced to death for bludgeoning to death another Tamil who had been a Karuna supporter. LTTE like Al Qaeda has already proved that they are terrorists sans borders. These assassinations of LTTE opponents outside Sri Lanka clearly demonstrate that LTTE has its tentacles of terrorism spread over many countries and not only a threat to Sri Lanka but to the whole civilized world. It is also a well known fact that LTTE has links with Al-Qaeda.

A report by an advisor to US Government states that The Al Qaeda-LTTE relationship was formed in 1991. LTTE is also linked to Maoists in Nepal and many other secessionists groups in India.

Despite all these connections and cross border terrorist activities, it's appalling to see that the western block of the International community thinks that LTTE is only a domestic threat to Sri Lanka.

Comparisons with al Qaeda made here:

When will the world wake up to the fact's that terrorist's groups like al-qaeda are copying the LTTE media wing who for years have spread LTTE propaganda around the world of LTTE attack's and over loaded the western media with claims and images of dead civilians in the same manner Al-qaeda are now doing via their very own Bin Laden TV.