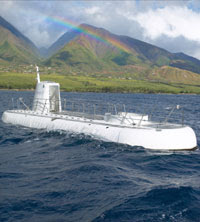 A 3 1/2-ton yellow submarine has fallen off the radar. The 10-foot-long sub, built by a resident to patrol Monterey Bay during the 1940s and 1950s, was reported missing Feb. 15 from its Santa Cruz Mountains berth on Steinmaier Road by owner Carl Barker.

"It sounds bizarre," said Detective Kevin Coyne of the Santa Cruz County Sheriff's Office. "All I know is ... there's no suspects."

Perhaps the neighbors thought it was lowering their property values?

Sub in photo is tourist boat from Hawaii. Imagine it yellow. And smaller.