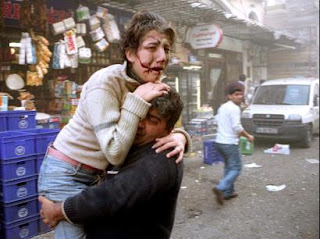 A Turkish court handed down life sentences Friday to seven men, all accused of having links to Al Qaeda, in connection with truck bombings that ripped through central Istanbul in November 2003, killing nearly 60 people.

Dozens of other defendants received lighter sentences, ranging from three to 18 years, for their role in the attacks days apart that targeted two synagogues, the British Consulate and a London-based bank.

Pandemonium erupted in the cramped, low-ceilinged courtroom as the chief judge announced the sentences.

"A long sojourn in hell for infidels!" shouted one of the convicted men, Fevzi Yitiz.

"God is great!" cried another.

Before the sentencing, one of the principal defendants, Harun Ilhan, harangued the court for five hours with a scorching denunciation of Western mores and the secular Turkish authorities who put him on trial.

"There is a war between my world and your world," said Ilhan, the only defendant to confess to a role in the bombing plot. "I am a prisoner of war…. You can kill me, but you cannot judge me."

Among those receiving life sentences was Louai Sakka, a Syrian accused as the mastermind and chief financier of the bombings. He also made a defiant statement before the sentencing.

"We are close to victory," he proclaimed. "I'll win my freedom and once again join the jihad."

***
Some of the defendants, including Sakka, face other charges. He is accused in a 2005 plot to attack an Israeli cruise ship bound for the Mediterranean resort of Antalya, in southern Turkey, which led to his arrest.