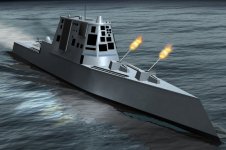 Seven new ships are budgeted for this year, barely a third of the number built annually during the peak Reagan-era defense buildup. Fifteen will be decommissioned, including the San Diego-based Ogden, Trenton and Dolphin.

The result is a fleet of 276, the lowest total in nine decades.

“The number of ships we're producing is absolutely pathetic,” said Winslow Wheeler, an analyst for the Washington, D.C.-based Center for Defense Information and a frequent critic of Pentagon priorities. “It's a system out of control.”

Navy leaders and military analysts have warned that if Congress doesn't boost the Pentagon's shipbuilding budget – $11.6 billion this fiscal year – the Navy won't be able to meet its growing list of commitments in Iraq, Afghanistan, Somalia, Latin America and the western Pacific.

To help pay for shipbuilding, the Navy has cut thousands of sailor billets from its rolls since 2003. It also has trimmed orders for new ships and stretched them out over more years.

Meanwhile, the nation's six shipyards – including General Dynamics NASSCO in San Diego – fear they'll have to lay off more workers if the Navy's pace of new projects doesn't speed up. The lack of steady work also prompts highly trained employees who design and construct warships to find other careers.

“That's a skill that, once it's lost, it'll be very, very difficult to get back,” said Fred Harris, president of General Dynamics NASSCO.

The Navy's biggest cost headache is the still-unbuilt DDG-1000 destroyer. The ship was conceived a decade ago as a $750 million replacement for the Spruance and, eventually, the Arleigh Burke-class destroyers that now form the backbone of the surface fleet.

Technologically, the sleek DDG-1000 is loaded: It will boast advanced radar, vertical-launch cells for Tomahawk and Sea Sparrow missiles, 155-mm guns with long-range, precision-guided projectiles and a super-efficient electrical generation system – all packed into a stealthy hull inspired by the Air Force's B-2 bomber.

But with a cost that has swelled to $3.6 billion, the ship keeps accountants awake nights. The Navy has cut its planned purchase of the ship from 30 to seven. Some defense analysts predict the Pentagon ultimately will buy only two or three.

“Cramming that much capability onto one ship is ludicrous,” said Bob Work, a defense analyst for the nonpartisan Center for Strategic and Budgetary Assessments in Washington, D.C. “Everybody outside the Navy looked at it and said, 'You're crazy.' ”

As an alternative to souped-up ships such as the DDG-1000, the Navy in the late 1990s hatched the bare-bones Littoral Combat Ship.

Small enough to operate in the near-shore seas and estuaries that Navy officials call “brown water,” the littoral hull was designed without weapons systems. Instead, warfighting modules for functions such as antisubmarine or countermine warfare could be designed separately and loaded onto the ships as needed.

The no-frills design would allow the mass production of at least 55 littoral ships, at a cost of no more than $220 million apiece. It is the key to Mullen's 313-ship blueprint.

The first four littoral ships, all under construction, were bound for San Diego. Then last month, Navy auditors discovered that costs had nearly doubled on the third ship, which Lockheed Martin is building. The Navy ordered the contract suspended for 90 days while it investigates.

Despite the program's troubles, even some critics of the Pentagon think the strategy of introducing more streamlined and smaller ships will offer the Navy its best chance of forming a sufficient fleet in an era of crushing technology costs.

Apparently the concept of "barebones" has lost something in the translation. 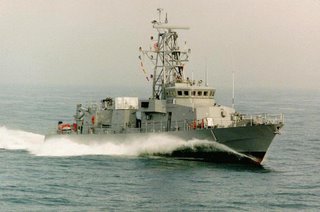 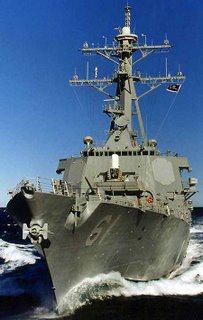 Burke class DDGs. Throw in a few dozen "arsenal ships" and stand by to fire for effect. 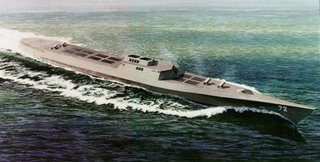 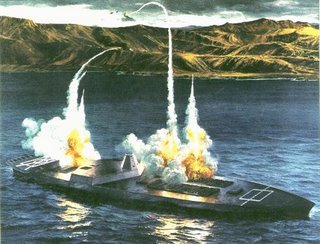 Go with simple, proven power plants and if you need new weapons systems, take a look at the Army's MLRS and Tactical Missile System again.

Producing large numbers of LCSs, Visbys and arsenal ships ought to keep shipyards busy and workers in their jobs.

Give commands to LCDRs and challenge them to develop the new tactics needed to fight in the littorals.

Build a few "Wild Weasel" ships to take down enemy radars.... treat the ships like a carrier air wing - not every ship has to do everything, have some specialists. And train like the devil.

Have a good OPFOR headed by an evil genius. Give him the tools and money to develop the Navy equivalent of the Army's Desert Training Center at Fort Irwin. Do not allow "restart the clock, restart the problem." Find the warriors who will go into harm's way with a swagger. Reward them.

The next Nimitz is not pushing paper in Millington and doesn't want a shore tour in the Pentagon. He/she wants to be at sea, leading sailors and getting ready to fight our enemies.

And if you find me a CO who is willing to take $3 billion dollar ship into the lttorals, let me know...

Fast, cheap, heavily armed and in great quantities seems to be the ticket to me.

As for the shipyards, pay 'em a fixed price with incentives for bringing the ships in on time on price. Convince them there's profit in numbers. 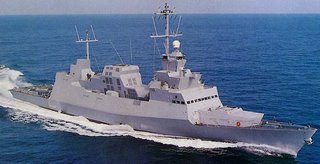 UPDATE2: Or how about a whole bunch of these hydrofoils (with weapons upgrades)? 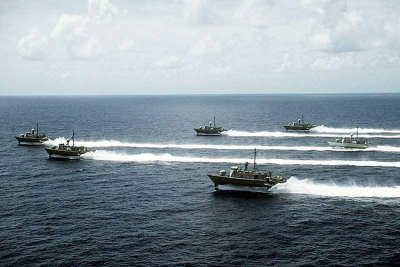 UPDATE3: And how about this system here? Can it be adjusted for shipboard use?