As World War II in the Pacific wore on, the military plans to attack Japan following the "island hopping" campaign that brought the Japanese Home Islands within bomber reach included some interesting logistical thinking.

One part of the plan developed by the Army Air Force involved bringing aircraft repair shops to the airplanes instead on taking the aircraft to the shops.

As set out here*, Project "Ivory Soap" (because it "floats," I assume) took some 24 ships and 5,000 men and turned the ships into floating aircraft machine shops:

In the Pacific Theater everything depended on conventional warfare, with B-29s bombers carrying the island-hopping war all the way to the Japanese home islands, with P-51s protecting the bombers.

One thing was certain: the invading aircraft would face a skilled and deadly foe in the air. Major damage to our planes was inevitable, but many of them would limp safely back to base. What then? No advanced air field had either the men or the machine shops and other facilities necessary for major airplane and engine repair and rebuilding.

Thus was born Ivory Soap, a secret project kept "classified" for more than a half-century. It is not even mentioned in the official history book "The Army Air Forces In World War II."

The idea arose in Air Corps staff meetings in Tunisia and Italy. It then went to Washington, where it was approved by the commander of the Army Air Corps, Gen. Henry H. "Hap" Arnold, and by the Joint Chiefs of Staff.

Ivory Soap consisted of 24 ships and some 5,000 men drawn from the Army, Navy, and Merchant Marine. The ships were six Libertys and eighteen 180-foot freight/salvage (F/S) auxiliary vessels that were converted into floating machine shops and repair and maintenance depots. Their main "clients" would be B- 29s and P-51s but they could handle any other aircraft as necessary.

This was not a Navy project:

The Libertys were designated Aircraft Repair Units, Floating (ARUs), each with a total complement of 344 men. The Aircraft Maintenance Units (AMUs) were 187 foot long ships built by Higgins in New Orleans and had a complement of 48 men. The ARUs (Libertys) had shop space big enough to accommodate components of the enormous B-29s. The more numerous and smaller AMUs could handle the fighters. Because of their shorter cruising range fighters advanced bases had to be more numerous, and closer to the targets; so did their floating repair depots.

Inevitably, the six hybridized Libertys were known as "The Generals." The 18 auxiliaries, each named in honor of an Army Colonel, naturally, were "The Colonels."

These ships returned hundreds of wrecked or seriously damaged B-29s and fighters to battle.

What was life like for the crews and shop workers? A bit of oral history (also linked in the USMMA article)here by a helicopter pilot,

whose mission is described as

"The way we had to fly the choppers was really primitive," Nigro said, "because we often carried many parts needing repair. We did anything - even taking off the 'copter doors - to lighten our load." 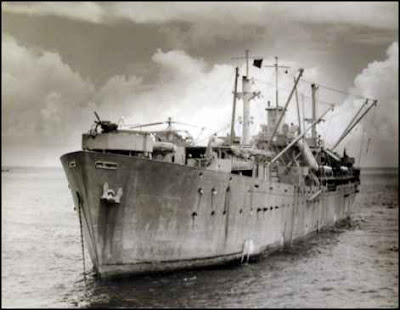 Back aboard the Dargue, the 2nd ARU continued performing third and fourth-echelon aircraft overhaul, Nigro said. "We did aircraft repairs that couldn't be done on land, because the large machinery and skilled labor simply wasn't there. For example, we had a complete machine and sheet-metal shop, with fully trained Army Air Corps technicians who could repair B-29 Super- fortresses limping back from bombing raids on Japan and P-51 Mustangs flying fighter escort duty. I was very proud of our technicians. They could fix anything from a wristwatch to an aircraft engine."

Nigro's ship was one of the few Liberty ships credited with shooting down not one, but two Japanese "Betties," he said. "It was on Dec. 6, 1944, about two o'clock in the morning, while we were anchored at Saipan," he said. "I remember afterwards that our squadron artist painted the Rising Sun flag - emblem of the Japanese empire - on our smokestack, as proof of our kill." The Dargue's eagle-eyed Navy gunners later took out another Bettie - and added another rising sun - near Iwo Jima on May 22, 1945.

Well, rack up some more credit for the logisticians, and from here, some thoughts on the Army Transport Service:

Without adequate transport and logistics military grand strategy and brilliant tactics are hopeless. It has been said that amateurs talk of strategy and tactics, professionals of logistics. Concentration of forces is worthless if they have no supply, no ammunition, no food -- if you cannot concentrate them in the first place. The Army had to rely on its own maritime resources until fairly recently in our history. It had difficulty. The following quote is the opening of a piece attributed to an unknown author on a page of Logistics Quotations (LogisticsWorld):

Logisticians are a sad and embittered race of men who are very much in demand in war, and who sink resentfully into obscurity in peace. They deal only in facts, but must work for men who merchant in theories. They emerge during war because war is very much a fact. They disappear in peace because peace is mostly theory. The people who merchant in theories, and who employ logisticians in war and ignore them in peace, are generals.

And for all who served in these ships, and who had to keep their service under wraps for so many years, a salute in recognition of a job well done! 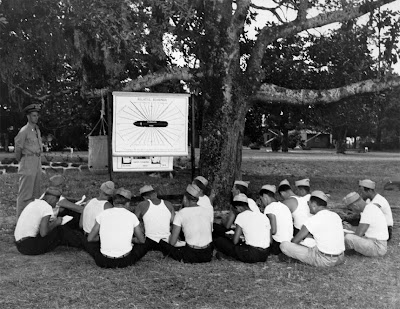 The Army Air Forces Mobile Air Service Command established the Marine Training School at Point Clear, Alabama in the summer of 1944. Its purpose was to provide training in elementary seamanship, marine training, and aquatic training for all officers and enlisted personnel of the Aircraft Repair and Maintenance Units (Floating).

However, since the caption on the chart says "Relative Bearings" - I think it was training in how to report contacts relative to a ship's heading instead of navigation training.

* Part of the excellent American Merchant Marine at War site
**First two photos are of SS Brig. Gen. Alfred J. Lyon circa 1964 and one of the "Colonels"- Colonel Armand Peterson.
***Lower photos are of ARU Maj. Gen. Herbert A. Dargue from here, provided to that site by the son of an officer who served in her. Original captions: Upper:

Maj. Gen. Herbert A. Dargue
This is off Iwo Jima in March, 1945, and the ship shows some wear.
You can clearly see the Sikorsky R-4B on deck.
There are two, when you study the photo.
Photo Courtesy of Lt. George W. Muller
Second Aircraft Repair Unit
Text Courtesy of William Muller